SILKEBORG, Denmark — A laughing Rachel Brown put it best as she stepped off the ice Thursday afternoon at the Silkeborg Sportscentre: “They’re still letting us play.” 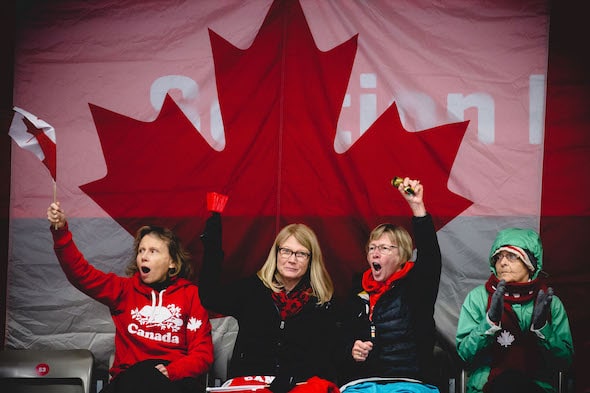 Yes, they are — with two round-robin games left to play on Friday, Team Canada still has a shot at a playoff position at the 2019 LGT World Women’s Curling Championship, presented by Pioneer Hi-Bred.

That playoff position seemed to be out of reach in the early going of Thursday’s game against Russia’s Alina Kovaleva, after the Russians put a three on the scoreboard in the first end against a Canadian team that just a few hours earlier had gone down to a 9-3 defeat to Switzerland’s Silvana Tirinzoni.

And just two and a half hours later, that early 3-0 deficit had turned into a 9-6 victory, improving Canada’s record to 5-5 — not in a playoff position, but not officially out of one, either.

“We made it a goal early the season to be a grinding team,” said Chelsea Carey. “We had a bad loss at an early event (in September) where we kind of gave up after we got a few points down, and I said to the girls, ‘This needs to be our identity. We need to own this and work really hard to be a team that grinds out wins.’ We’ve done it all year, we did it all through the Scotties, in the final, and it’s been like that all week here, too. It’s been tough, we’ve been fighting for every inch, but we’re good at that and we’re just rolling with it.”

That was evident against the Russians, who dipped to 7-3 with the loss. After giving up the three in the first end, the teams then traded deuces in the second and third ends. But Canada would tie it with a Carey tap for three in the fourth. And from then on, Canada was in control.

“In other games, that would happen (giving up a big end like the three in the first against Russia) and it would kind of snowball,” said Brown. “In this game, we were just like, ‘You know what? Let’s just get our deuce back, and we’re right back in it.’ That was our mindset — just keep plugging away, like we did in the Scotties final. We felt like the old Team Carey.”

Canada would steal one in the seventh and then force Russia to a single in the eighth. 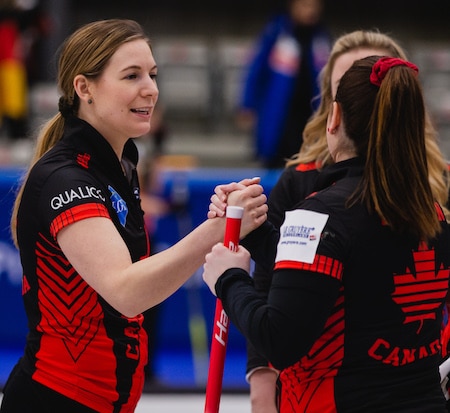 And then in the ninth, with Russia applying significant pressure, two wonderful shots from Wilkes essentially won the game for Canada — the first a runback triple takeout and the second a wonderful draw behind a corner guard. That set the table for Carey to finish off the end with a draw for three.

Six teams will make the playoffs when round-robin play wraps up Friday evening; Canada currently sits tied for seventh with Jamie Sinclair of the U.S. But those 5-5 teams are just one position back of Seina Nakajima’s Japanese team (5-4), which plays three teams above it in the standings to close out the round robin.

Not that Canada’s path is easy on Friday — a game with reigning Olympic champ and playoff-bound Anna Hasselborg of Sweden (8-1) at 4 a.m. (all times Eastern) and against the host Danes skipped by Madeleine Dupont (2-8) at 2 p.m., with a full house of Danish fans likely in attendance.

“Unfortunately, we keep putting ourselves in this situation where we need the big wins,” said Carey. “But we pulled one off today. We have a tough day tomorrow with two really good teams, and we have to keep doing this. I can’t guarantee we’re going to win, but I can guarantee we’ll give it everything we have on the ice, and we won’t quit until the last rock is thrown.”