Future Canadian curling stars are converging in Sherwood Park, Alta., for the third edition of the Canadian Under-18 Boys and Girls Curling Championships, beginning on Tuesday at the Glen Allan Recreation Complex. 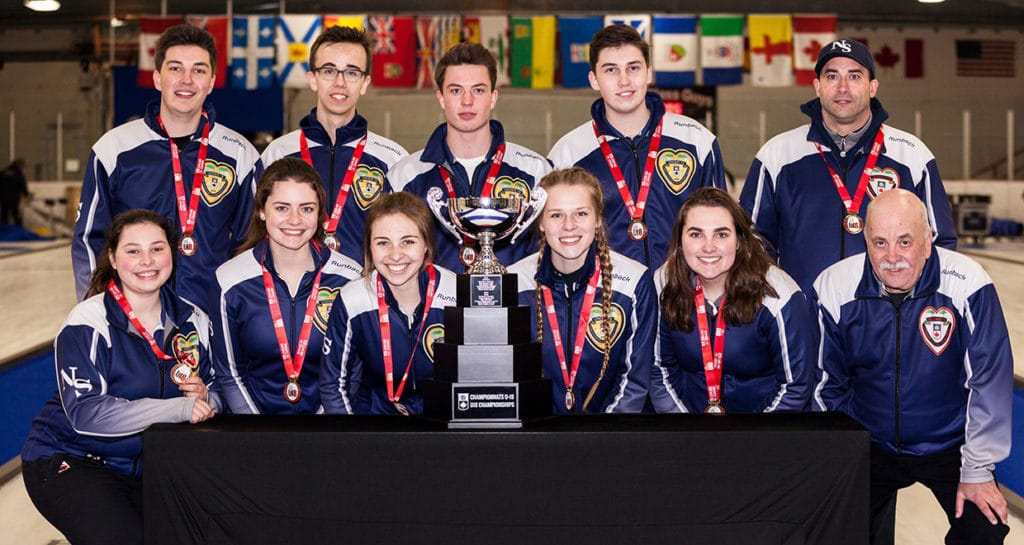 Both the Nova Scotia boys and girls teams will attempt to defend their titles at the 2019 Under-18 Canadian Curling Championships. (Photo, Curling Canada/Mark Finley)

Both the Nova Scotia boy’s and girl’s teams are aiming to defend their titles after sweeping the competition last year in Saint Andrews, N.B.

It is Purcell’s third national championship this season. He threw fourth stones for Nova Scotia at the 2019 New Holland Canadian Juniors and third for Dalhousie University Tigers at the 2019 U SPORTS-Curling Canada Championships.

Alberta will have two boys teams at the event. The first team, which won the Alberta U-18 title, is skipped by Nathan Molberg from the St. Albert Curling Club. His team played at the 2019 Canada Winter Games in Red Deer, Alta., last month and advanced to the quarter-finals with a 7-3 round-robin record.

Alberta will also have a host team skipped by Cortland Sonnenberg, the son of Renée, who skipped Alberta at the 1999 and 2001 Scotties Tournament of Hearts. Sonnenberg is also a coach for the Curling Canada women’s program and analytics lead.

Fourteen boys teams will compete for the title. Nunavut and Yukon are not sending representation; therefore those spots were filled by the Alberta host team and, because it won last year’s competition, Nova Scotia received a second spot in the boy’s event.

On the women’s side the defending Nova Scotia girl’s champions, skipped by Isabelle Ladouceur, will not be in the competition but the province still has strong representation. Cally Moore of the Mayflower Curling Club in Halifax aims to build on the bronze medal she earned at the 2019 Canada Winter Games.

The quartet of Lauren Ferguson, Katie Shaw, Alexis Burris and Lexie Murray from the Cornwall Curling Club in Prince Edward Island will also reach a special milestone this season. This will be third time they’ve represented P.E.I. at a national curling championship this season after playing at the New Holland Canadian Juniors and Canada Winter Games.

Nunavut is not represented in the girl’s competition this year; therefore in addition to Alberta’s championship team skipped by Jessica Wytrychowski (Airdrie Curling Club), Alberta will also have a host team led by Julia Bakos from the Crestwood Curling Club in Edmonton.

The teams competing will attempt to continue a trend that’s been set over the first two years of the event. Each year a province has swept both the boy’s and girl’s titles. Northern Ontario won both titles during the inaugural championships in 2017 and Nova Scotia did the same in 2018.

The fourteen teams in both the boys and girls competitions are divided into two pools of seven. They’ll play a six-game round robin with the top four teams from each pool advancing to a double-knockout bracket that will qualify four teams for the medal-round games. Those four teams compete in the semifinals with the winners advancing to the gold-medal games and the losers playing for bronze.

All draws will be live-streamed on Curling Canada’s Youtube page, found here: https://www.youtube.com/curlingcanada