LETHBRIDGE, Alta. – Yuta Matsumura and Team Japan survived an early scare from the Netherlands to score a 9-7, extra-end victory that kept them unbeaten at 4-0 Monday at the 2019 Pioneer Hi-Bred World Men’s Curling Championship, presented by Service Experts Heating, Air Conditioning and Plumbing. 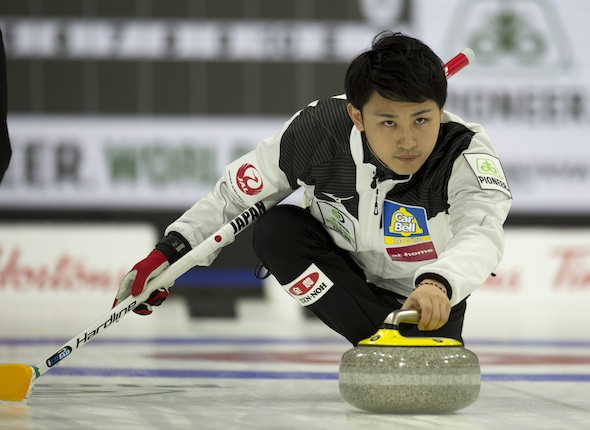 Defending champion Niklas Edin of Sweden also kept pace with the front-runners, improving to 4-0 with an easy 8-2 win over Marc Muskatewitz of Germany (1-3). Matsumura, third Tetsuro Shimizu, second Yasumasa Tanida, lead Shinya Abe, alternate Kosuke Aita and coach Bob Ursel surrendered a three-ender in the second and trailed 4-2 after three before fighting back. “It’s same as usual,” Matsumura said of his team falling behind early. Jaap Van Dorp and the Netherlands (2-2) had a great opportunity to leap into a huge lead in the third, sitting four with skip rocks to come. But Matsumura drew into a trio of Dutch counters to cut that to a steal of one. The Netherlands was in good position in the fourth as well until 20-year-old vice-skip Wouter Gösgens, throwing fourth stones, cleared out two guards trying to sneak through a narrow port, opening up the house for Japan. Still, Matsumura had to make a tight double to get a single. Japan got the lead with a steal of two in the fifth. The Netherlands elected not to try a tight double, electing to draw to try to cut Japan to a single but Gösgens was wide, leaving Japan with the deuce. “We let it slip away a bit,” van Dorp said. “We just had some key misses, some unfortunate shots that didn’t work out the way we wanted to and actually gave good opportunities to our opponent in the second half. Still a good fight-back, got two in ten to go to extra but unfortunately they didn’t miss.” Matsumura said he’s generally pleased with the way his team has played but “has to stay focused with big games coming up” against Sweden, Canada and the United States. Abe, who translate for Matsumura, said it was a tough game, but the team stayed focused to get the critical win. “This was the most important game for us during the round-robin to get to the playoffs,” he said. Edin continued to roll along, this time needing just six ends to get Muskatewitz to shake hands after giving up four for an 8-2 final score.

“It felt good to get a quick one and get some rest now,” said Edin, who is chasing a record-tying fourth world championship. “We’ve had a lot of games like this where we started well, played really well the first half and then kind of let a couple of ends slip away, making for a little longer game than necessary. This game was a really nice game and when we got the four it was obvious handshake.” Edin, third Oskar Eriksson, second Rasmus Wranå, lead Christoffer Sundgren, alternate Daniel Magnusson and coach Fredrik Lindberg, scored deuces in the first and third ends and held Germany to singles in the second and fourth. In the only other morning game, SooHyuk Kim of South Korea (1-3) scored two in the extra end to beat Sergey Glukhov of Russia (04) 6-4. Two other front-runners, Kevin Koe and Team Canada at 4-0 and Peter de Cruz of Switzerland at 3-0, had the morning draw off. The 2019 Pioneer Hi-Bred World Men’s Curling Championship continues with draws today at 2 p.m. and 7 p.m. (all times MT). Live scoring, standings and statistics for the 2019 Pioneer Hi-Bred World Men’s Curling Championship are available at wmcc2019.worldcurling.org/ TSN and RDS2 will provide complete coverage of the 2019 Pioneer Hi-Bred World Men’s Curling Championship. CLICK HERE for the complete schedule. For ticket information for the 2019 Pioneer Hi-Bred World Men’s Curling Championship, go to www.curling.ca/2019worldmen/tickets/ This story will be available in French as soon as possible at www.curling.ca/2019worldmen/?lang=fr