SHERWOOD PARK, ALTA. — Katie Follett’s Newfoundland & Labrador team might have lost its first two games of the Canadian Under-18 Curling Championships on opening-day Tuesday, but it was at least on their own terms. If it wasn’t for the power of social media, the kindness of a Good Samaritan and a little luck, the team wouldn’t have made it to Sherwood Park, Alta., for the first day of competition. 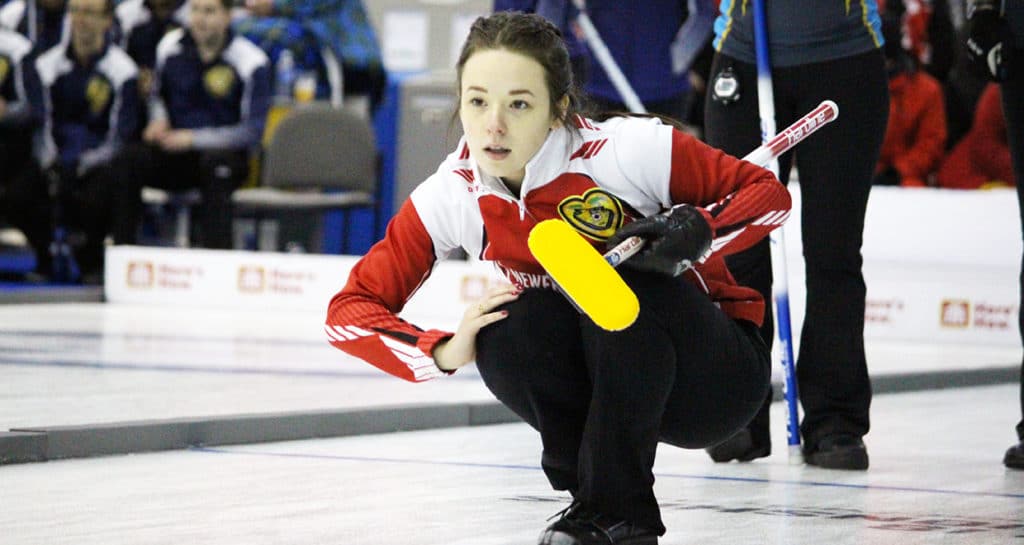 Katie Follett and her team from St. John’s, N.L., weren’t sure if they’d make it to Sherwood Park, Alta., for the opening day of the 2019 Under-18 Canadian Curling Championships. (Photo, Curling Canada/Brian Chick)

After checking with multiple airlines, the soonest they could fly to Edmonton and arrive in Sherwood Park would have been late Tuesday afternoon. The team would have to forfeited their first two games. This misfortune left them scrambling, literally, to find an alternate route to the Glen Allan Recreation Complex and Sherwood Park Curling Club.

“Running around like chickens with our head’s cut off basically, trying to figure out how to get here before tonight,” Follett said of their experience at the Toronto Pearson International Airport.

After three hours of trying to figure out a plan, the team was coming to terms with the fact it would likely miss the first day of competition.

But a tweet was about to change all of that.

Follett’s mom put out a tweet to Air Canada asking for help to get the five athletes (Newfoundland & Labrador skip Joel Krats was with the women’s team) and their coach to the event on time. 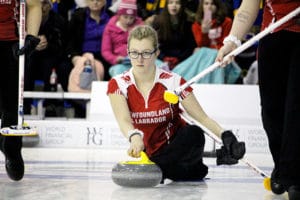 If it wasn’t for the help of social media and a Good Samaritan, Newfoundland & Labrador vice-skip Sarah Chaytor wouldn’t have been able to throw a rock on Tuesday. (Photo, Curling Canada/Brian Chick)

Jo MacGillivary, a dedicated curling volunteer, saw the tweet and offered to give the team a ride to Sherwood Park should they fly to her hometown of Calgary. The team managed to get six standby tickets for the next flight to Calgary which, as luck would have it, had six empty seats for the team.

Armed with a “Team NL” sign and an array of blankets and snacks, MacGillivary drove the team for three hours and got them safely to the host hotel at 2:30 a.m. on Monday morning.

Because of this, the team could play their two regularly scheduled games on Tuesday.

The results weren’t what they hoped for. First was a 7-6 loss to Alberta’s Jessica Wytrychowski (Airdrie Curling Club), followed by a 5-4 loss to Quebec’s Cynthia St-Georges (Laval-sur-le-Lac) – both in extra ends. But being able to play the games meant a lot to the team.

“Playing the game, to us at this point, was the best thing that could happen because for a second it looked like we weren’t going to be able to play either game,” Follett said.

They could also take part in the event opening ceremony on Monday night, which featured a unique ceremonial first stone where all players and dignitaries tossed inflatable curling rocks into the air. It’s a moment they will never forget because it nearly never happened.

“It was extra special for us because we thought for a minute that it was all going to be taken away,” Follett said.

To view all scores, standings, lineups and schedules, visit the event website: https://www.curling.ca/2019under18/ All games on sheet C will be streamed live on Curling Canada’s Youtube page: https://www.youtube.com/curlingcanada