LETHBRIDGE, Alta. – Peter de Cruz and Team Switzerland cracked a record-tying six-ender on their way to an 11-2 win over SooHyuk Kim of South Korea (0-8) to earn a share of top spot Wednesday at the Pioneer Hi-Bred World Men’s Curling Championship, presented by Service Experts Heating, Air Conditioning and Plumbing. 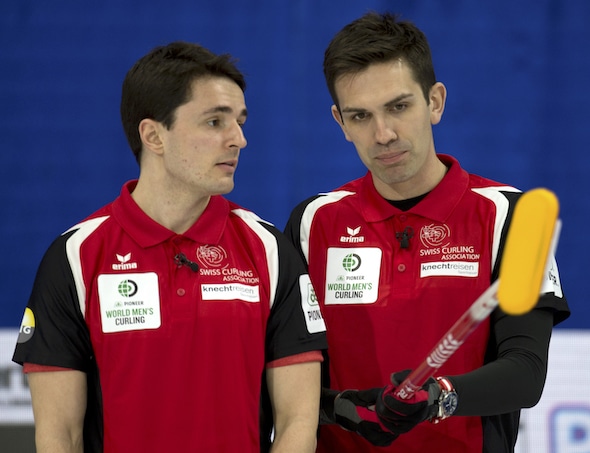 The Swiss team that includes vice-skip Benoît Schwarz, who throws fourth stones, third Sven Michel, lead Valentin Tanner, alternate Claudio Pätz and coach Thomas Lips, tied the record for the highest score in a single end in the fifth. The record has been matched numerous times over the years. The win improved their record to 7-1, the same as Japan and Sweden. “After yesterday’s loss (9-4 to Sweden) we wanted to bounce back and made sure we don’t start going into a false rhythm,” said de Cruz. “The score probably didn’t reflect exactly what happened during the game. When you’re four behind you go all in and try for multiple points. They took some risks and we just played everything perfectly the last three ends.” Trailing 5-1, Kim gambled in the fifth and paid a heavy price when he missed his shot and gave up the huge steal. “He had a draw for one, but he thought maybe there was an in-off for two,” explained de Cruz. “I think they were always in a little bit in trouble and he tried to create a shot at the end that was almost impossible, and he hit the wrong side of the rock.” Defending champion Niklas Edin of Sweden also moved into a share of top spot at 7-1 with a 9-5 win over Sergey Glukhov of Russia (2-6) opening with a deuce and stealing singles in the second and third ends. Reigning Olympic champion John Shuster of the United States (6-2) had a more difficult time of it, falling behind 4-1 after four ends before turning things around and rallying for a 7-5 win over Qiang Zou of China (1-7).

“That’s the beauty of 10-end games, I hope they never go away,” a relieved Shuster said. “You can get off to a less than perfect start and you have time to get back into games. An eight-end game you might not have that time and have that been an eight-end game I think it would have been a different result.” The turn-around, he said, could be attributed to his team’s resilience, and a steal of two in the sixth that finally gave them the lead. “We just kept executing. We didn’t catch a few breaks early. We forced them to make some tough shots down the stretch and we had a great sixth end when we got that steal of two.” Magnus Ramsfjell of Norway (2-6) posted two deuces to beat Marc Muskatewitz of Germany (1-7) 6-3. The 2019 Pioneer Hi-Bred World Men’s Curling Championship continues with tonight’s draw at 7 p.m. MT. Live scoring, standings and statistics for the 2019 Pioneer Hi-Bred World Men’s Curling Championship are available at wmcc2019.worldcurling.org/ TSN and RDS2 will provide complete coverage of the 2019 Pioneer Hi-Bred World Men’s Curling Championship. CLICK HERE for the complete schedule. For ticket information for the 2019 Pioneer Hi-Bred World Men’s Curling Championship, go to www.curling.ca/2019worldmen/tickets/ This story will be available in French as soon as possible at www.curling.ca/2019worldmen/?lang=fr