LETHBRIDGE, Alta. – Niklas Edin and Team Sweden (6-1) cracked a pair of three-enders Tuesday evening to beat Peter de Cruz of Switzerland (6-1) 9-4 and reduce the ranks of unbeaten teams at the Pioneer Hi-Bred World Men’s Curling Championship, presented by Service Experts Heating, Air Conditioning and Plumbing to one – Kevin Koe of Canada (6-0), who had the night off. 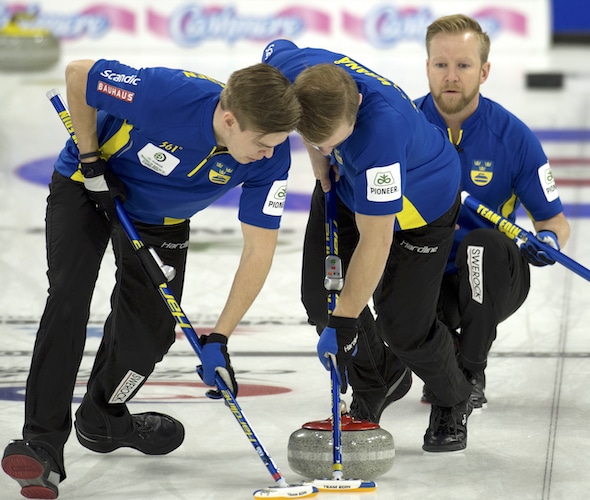 Edin, third Oskar Eriksson, second Rasmus Wranå, lead Christoffer Sundgren, alternate Daniel Magnusson and coach Fredrik Lindberg, bounced back impressively from a morning loss to Bruce Mouat of Scotland. And it was an important win in more ways than one. “The loss to Scotland doesn’t really matter as long as we keep on winning,” said Edin, who is seeking a record-tying fourth championship. “This one was way more important because now we’re at the same points, but now we have the head-to-head (advantage) with Switzerland. So for sure bouncing back was really important for our self-confidence and going 0-2 today would have been tough.” The teams traded singles through three ends before Sweden broke through for three in the fourth and added three more in the sixth before a deuce in eight ended the match. “In the beginning it was going back and forth, a lot of tricky ends that didn’t end up the way it was looking in the beginning of the ends,” said Edin. “A little back and forth, but after a while I think we started making more shots. When we got that three-pointer it felt like our game the rest of the way.”

de Cruz, vice-skip Benoît Schwarz, who throws fourth stones, third Sven Michel, lead Valentin Tanner, alternate Claudio Pätz and coach Thomas Lips, had some chances to set up ends through the middle of the game but couldn’t get the right rock positioning and when they did, the Swedes made the key shots to turn the ends around. “We know that whenever we play these guys we both play full offence,” said de Cruz. “Most of the time it never goes to the end, either one team or the other. This day it was them because we weren’t able to play as well as we wanted to. “Still we’re OK, still in the driving seat I guess. This game would have been nice for the playoff rankings, but we’ll just have to win some other ones.” Bruce Mouat of Scotland (3-3), a bronze-medallist last year, posted three deuces to beat SooHyuk Kim of South Korea (0-7) 7-3, Joel Retornaz of Italy (4-2) scored two in the 10th end to beat Sergey Glukhov of Russia (2-5) 5-3, and Yuta Matsumura of Japan (6-1) also had three deuces in a 6-4 win over Marc Muskatewitz of Germany (1-6). The results left six teams currently sitting in playoff positioning – Canada at 6-0, Switzerland, Sweden and Japan all at 6-1 and Italy and the United States at 4-2. The 2019 Pioneer Hi-Bred World Men’s Curling Championship continues with draws Wednesday at 9 a.m., 2 p.m. and 7 p.m. (all times MT). Live scoring, standings and statistics for the 2019 Pioneer Hi-Bred World Men’s Curling Championship are available at wmcc2019.worldcurling.org/ TSN and RDS2 will provide complete coverage of the 2019 Pioneer Hi-Bred World Men’s Curling Championship. CLICK HERE for the complete schedule. For ticket information for the 2019 Pioneer Hi-Bred World Men’s Curling Championship, go to www.curling.ca/2019worldmen/tickets/ This story will be available in French as soon as possible at www.curling.ca/2019worldmen/?lang=fr