STAVANGER, Norway — The Canadian senior women’s and men’s teams both opened the 2019 World Senior Curling Championships with victories against their Russian counterparts on Saturday in Stavanger, Norway. 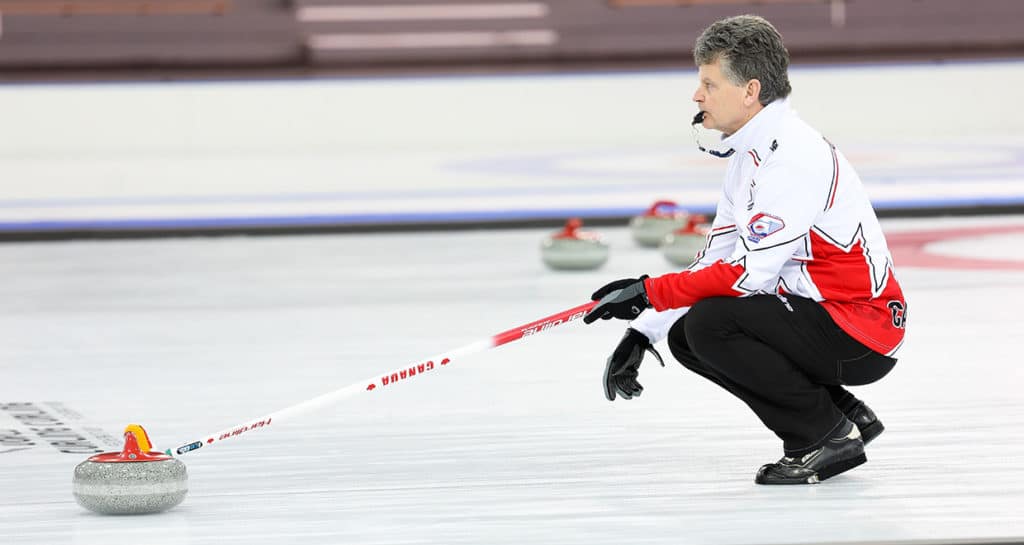 Canada’s Sherry Anderson (Nutana Curling Club, Saskatoon) picked up an 11-4 victory against Tatiana Smirnova and Bryan Cochrane of the Russell Curling Club in Ontario, defeated Igor Minin 11-5 on the opening day of competition at Sørmarka Arena. Both teams are 1-0 in their respective pools. 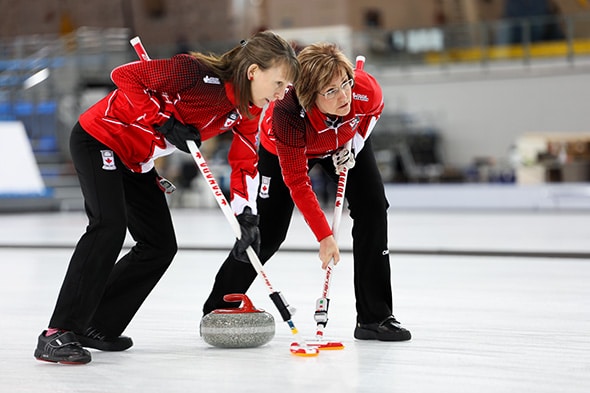 Brenda Goertzen, at left, and Anita Silvernagle of the Canadian senior women’s team sweep a rock during their game against Russia on Saturday. (Photo, World Curling Federation/Alina Pavlyuchik)

Despite winning by a seven-point margin, Anderson’s team trailed Russia early in the game. After blanking the first end, Canada had a draw for two in the second. But there was trouble for the Canadians in the third. Anderson’s final freeze attempt was light, which left Smirnova with a draw path to the button for a score of three and a 3-2 lead. But the veteran Canadian team responded in the fourth end. Anderson, vice-skip Patty Hersikorn, second Brenda Goertzen, lead Anita Silvernagle and coach Bill Tschirhart took advantage of a missed runback attempt by Russia and made a draw for four to regain the lead. At that point, Canada sailed away with the victory. It stole four in the fifth end, kept Russia to one in the sixth and scored one in the seventh to force handshakes from Russia. A win is a win, but it left Anderson desiring a bit more. “It was a good end result, but we didn’t throw them great. We had some misses that we typically don’t,” Anderson said. “But it’s the first game of the competition. It was okay, but we can be sharper than what we were.” Anderson and her team are the defending world senior women’s champions and they are prepared to make another run at the title. But they understand it won’t be easy. “There’s no guarantee that of course we’ll win because there’s a lot of teams here thinking the same thing,” Anderson said.  “If we play like we can, we should have a very good result in the end. Our main goal right now is to get into the playoffs, of course, and build from that. This was a good starting game because it left some room to improve.” The Canadian senior women will have a busier Sunday with two games. First they’ll take on Finland’s Mari Hansen at 2 a.m. (all times ET), followed by a duel with two-time Olympic gold-medallist Anette Norberg of Sweden at 10 a.m. On the Canadian senior men’s side, skip Cochrane, vice-skip Ian MacAulay, second Morgan Currie, lead Ken Sullivan, alternate Paul Adams and coach Tschirhart also scored 11 points on their way to victory. Cochrane believes every win going forward will be critical while moving through a field of teams that is stronger than ever. “There’s five or six good teams here that can win it all, which wasn’t the case in Lethbridge [where he represented Canada in 2017],” said Cochrane. “There’s lots of good teams, but we’re a good team too.” 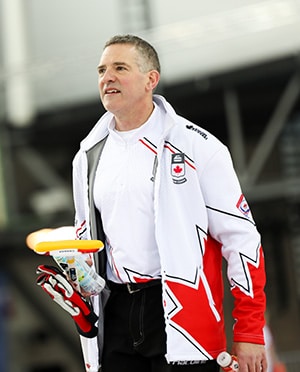 The Canadian senior men’s team soared to an early 5-0 lead after scoring two with the hammer in the first, followed by a steal of three in the second end. While Minin, the Russian skip, made an angle-raise takeout for three in the third, Canada negated it the following end. Cochrane and the Canadians made a short double-tap to score three, taking an 8-3 lead at the fourth-end break. Canada took a 9-3 lead in the fifth end after Russia missed its blank attempt and gave up a steal of one. Russia managed a score of two in the sixth, but Canada extinguished any hopes of a comeback in the seventh end with a draw for two. Russia conceded after seven ends. Overall, Cochrane was pleased with his team’s opening-day performance, especially from front-end players Currie and Sullivan. Currie is playing in his first world championship and Cochrane was impressed with his debut on the ice. “There’s a lot going on in a big arena like this with six sheets at once and mixed doubles on the other side,” Cochrane said of the venue that holds 13 sheets of curling ice within the bowels of an oval speed skating track. “But once you’re focused, it’s pretty easy to tune out the fans and make the shots at hand.” Canada is back on the ice Sunday against Kazakstan’s Viktor Kim at 2 p.m. For Team Canada updates, go to www.curling.ca. Follow us on Twitter, @curlingcanada. For live scoring, standings and team lineups from the 2019 World Senior Curling Championships, go to www.worldcurling.org/wscc2019. The French version of this story will be posted as soon as possible at www.curling.ca/?lang=fr