Wins for Cochrane and Anderson at 2019 World Senior Curling Championships

STAVANGER, Norway — The Canadian senior men’s team faced its most challenging test so far at the 2019 World Senior Curling Championships in Norway, while the senior women’s team picked up another victory on Monday. 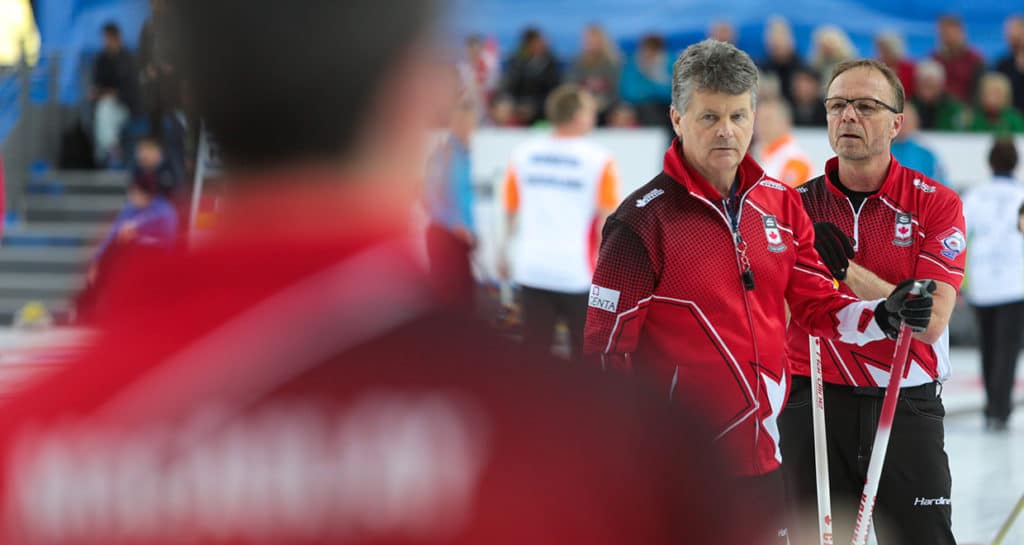 Cochrane, vice-skip Ian MacAulay, second Morgan Currie, lead Ken Sullivan, alternate Paul Adams and coach Bill Tschirhart opened the game with a hit for three, but the Germans – who were previously unbeaten – countered with a hit for three points of its own in the second end.

“We made some nice shots in the first end and we got fooled on the speed in the second and he had a pretty easy shot for three and that was disappointing,” Cochrane said.

But Canada regained its lead in the third end with a draw for two and did not relinquish. It forced Germany to one in the fourth and took advantage of Germany’s aggressive game plan in the fifth to score five.

“We were always in kind of control. We got our deuce back and were fortunate to just give up one in the fourth. By the fifth end he kind of went for it and we got the five and that took the pressure off,” Cochrane said.

Germany put together scores of two in the sixth end and a steal of one in the seventh, but couldn’t overcome Canada’s lead. Cochrane expected a tough game from Germany as the team reaches the halfway point of the round robin.

“We knew after the first two games that we would probably start the competition today in a way,” Cochrane said. “We watched the German guys and they were throwing them pretty well yesterday and we knew we’d have a game.”

They were also battling some ice conditions since the weather outside Sørmarka Arena reached 20 degrees Celsius. Cochrane noticed the speed of the ice differ depending on the path. He’s also managing the rocks and noticing some reacting differently on the ice, which can be a challenge.

“That’s why it’s always good to get a lead and throw some easier shots. You don’t have to always throw pressure shots with rocks you’re not quite sure of,” he said.

The Canadian senior men’s team takes on Netherlands on Tuesday at 6 a.m. (all times ET).

On the senior women’s side, Anderson, vice-skip Patty Hersikorn, second Brenda Goertzen, lead Anita Silvernagle and coach Tschirhart won their lone game of the day. They bested Lithuania’s Gaiva Valatkiene 12-2. Canada’s win featured a score of four in the first end, three in the fourth and four more in the fifth.

The team takes on Australia’s Sandy Gagnon on Tuesday at 2 a.m.