An expanded field of 14 teams will be on the ice when the 2019 Canadian Wheelchair Curling Championship begins Friday at the Club de curling de Boucherville in Boucherville, Que. 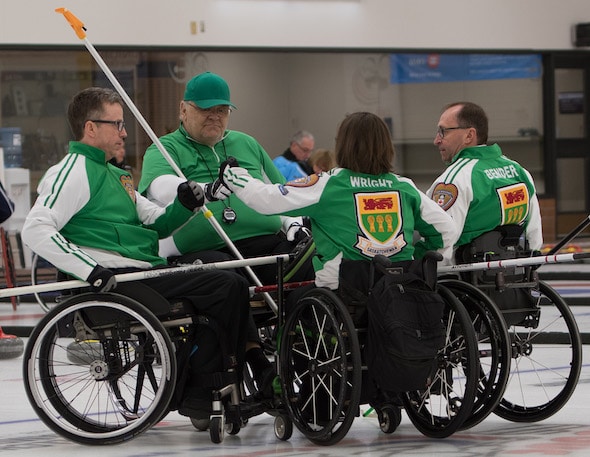 With an eye on increasing participation in the Paralympic discipline from coast to coast, some provinces and territories will be sending two entries to Boucherville, and the result of that expanded field means the teams will be split into two pools of seven.

Ten provincial champions will be competing in Boucherville, in addition to a host Quebec team, and entries from the provinces that finished in the top three at the 2018 Canadian Wheelchair Curling Championship in Leduc, Alta. — champion Saskatchewan, silver-medallist Manitoba and bronze-medallist British Columbia.

It will be the 16th edition of the Canadian Wheelchair Curling Championship, and it will be the fourth time in the past six years the event will be played in Boucherville, and managed by Défi sportif AlterGo, which organizes nationally and internationally sanctioned competitions focusing on adapted sports, in conjunction with Curling Canada.

Among those 14 entries will be some of the best wheelchair curlers who’ve ever played the game on behalf of Canada, including two-time Paralympic gold-medallist Jim Armstrong, who will be skipping an Ontario team from Nepean that includes current national-teamers Collinda Joseph and Jon Thurston. Armstrong is a two-time Canadian champ (2008, 2009).

Meanwhile, Marie Wright will be skipping Saskatchewan champs from Moose Jaw, seeking a second straight gold medal, and a third in four years.

Meanwhile, Manitoba’s Dennis Thiessen — a Paralympic gold-medallist in 2010 and bronze-medallist last year (as was Wright) — will be looking to improve on the silver he won last year and return to the gold-medal form he showed in 2014 and 2017. Thiessen was inducted into the Canadian Curling Hall of Fame earlier this year.

The two B.C. teams also have no shortage of podium potential. The B.C. champs from Delta are skipped by Darryl Neighbour, who’s pursuing his fourth Canadian championship, while B.C. #2 (Kelowna/Langley/Delta/Richmond) is skipped by Gerry Austgarden, who’s looking for his third national gold medal. Both Neighbour (2010) and Austgarden (2006) also are former Paralympic gold-medallists.

Also in the field, and carrying the home-province hopes, will be 2013 Canadian champ and 2014 silver-medallist Benoit Lessard and his team from Magog.

The full list of teams can be seen by CLICKING HERE.

The Canadian Wheelchair Curling Championship began in 2004. It was captured the first three years by Team Canada (skip Chris Daw), then by British Columbia the next four— 2007 (Neighbour), 2008 and 2009 (Armstrong) and 2010 (skip Gary Cormack, who will be playing second for Neighbour in Boucherville).

The teams practise Thursday beginning at 3 p.m. (all times Eastern), with the first round-robin draw set for Friday at 10 a.m.

The gold- and bronze-medal games will take place Wednesday, May 1, at noon.

The complete draw is available by CLICKING HERE. For live scores and standings during the event, CLICK HERE.