STAVANGER, Norway — Bryan Cochrane and Hugh Millikin have played some big games against each other, but perhaps none were as big as the one played on Friday at the 2019 World Senior Curling Championships. 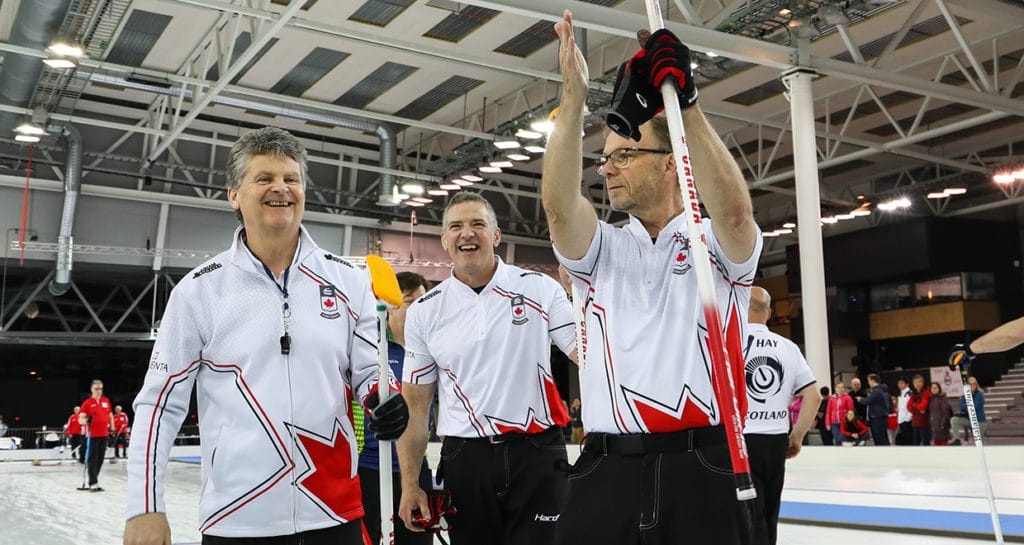 Cochrane and Millikin battled each other on the ice during the early 1980s in Ottawa. Millikin has since moved to Australia and represented the country at a world men’s championship and numerous world senior championships, including the current one at Sørmarka Arena. Cochrane, representing Canada, defeated Millikin’s Australian team 7-2 in the quarterfinals and earned a spot in the semis. “I was up for this game and I know he was up for this game too. I know he would have loved to have beaten us,” Cochrane said. “He was a real competitor and he still is. You can see it in his eyes. So it was fun to come out and play really well.” Cochrane, vice-skip Ian MacAulay, second Morgan Currie, lead Ken Sullivan, alternate Paul Adams and coach Bill Tschirhart scored two in the first with hammer and added a steal of two in the second for an early 4-0 lead. Australia took one in the third and Canada blanked the fourth end to take a 4-1 lead at the break. “Right from the start we maybe made a couple half-shots in the first end, but in the second end we made eight in a row. It put a lot of pressure on him and just changed the game. We were in control then,” Cochrane said. Canada scored two in the fifth end and teams exchanged single points in the sixth and seventh before Australia shook hands. The team from the Russell Curling Club in Ontario will play Denmark’s Ulrik Schmidt in the semifinals at 3 a.m. (all times ET). Denmark defeated Geoff Goodland of the United States 6-4 in its quarterfinal game. The winner advances to the gold-medal game and the loser will play in the bronze-medal game. Both games will be played at 8 a.m. Canada’s senior women’s team led by Sherry Anderson of the Nutana Curling Club in Saskatoon did not play on Friday. She had a 7-0 record in the round robin and qualified directly into the semifinal. She’ll take on Scotland’s Susan Kesley. Kesley defeated Margie Smith of the United States 5-1 in a qualification game. The senior women will play the semifinal games at 3 a.m., followed by a gold- or bronze-medal game at 8 a.m. For Team Canada updates, go to www.curling.ca. Follow us on Twitter, @curlingcanada. For live scoring, standings and team lineups from the 2019 World Senior Curling Championships, go to https://www.worldcurling.org/wscc2019/ The French version of this story will be posted as soon as possible at www.curling.ca/?lang=fr