After years and years of knocking at the door, Jack Smart and his Alberta teammates finally wheeled their right through it on Wednesday afternoon in Boucherville, Que. 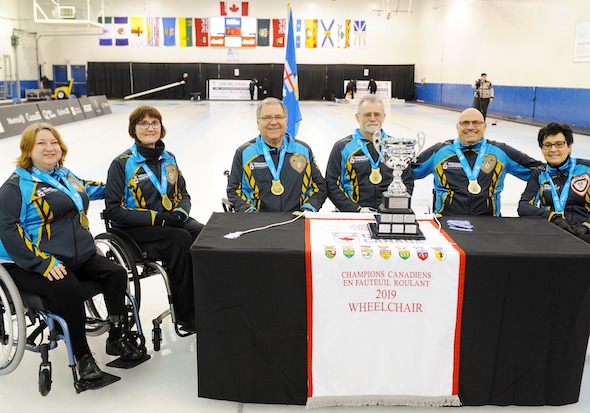 Smart, Yizek and Hibberd have played together in 13 of the past 14 Canadian Wheelchair Curling Championships (Purvis joined the team in 2009), but until Wednesday’s final, their best result had been silver, on five occasions, including two years ago in Boucherville, where Alberta bowed to Thiessen and Team Manitoba 11-1 in the gold-medal game.

So, there was no shortage of relief, satisfaction and joy on the faces of the Alberta players after beating  Thiessen’s Winnipeg team, which had won gold in 2017 and silver last year.

“Our team has been together for so many years, and everybody’s aging, getting older, and every year, at the start of the season, we’re like, OK, one more year, one more year,” said Smart. “So, I’m a little bit at a loss for words. It’s one of those things where finally, finally, we put it all together in the game when we needed to put it all together — in THE game that counted.”

Both teams entered the playoffs with 4-2 records, with Alberta having beaten Manitoba 8-6 in the round-robin.

After both teams prevailed in their semifinals — Alberta downed Northern Ontario’s Doug Dean (Thunder Bay) 8-5 in one semi, while Manitoba turned back Ontario’s Jim Armstrong (Nepean) 10-2 in the other — it set up a rematch in the gold-medal game.

And much like their round-robin game, it was steals by Alberta that made the difference. In the round robin, Alberta took control with a steal of one in the third end followed by a steal of four in the fourth.

On Wednesday, after a pair of blanks to open the game, Alberta drew first blood as Smart made an open hit for two in the third.

In the fourth, Thiessen’s last-rock draw came up light, gifting the stolen deuce to Alberta.

And then in the fifth, it got worse as Manitoba was gambling with rocks in play to generate a comeback, but it was Alberta sitting three as Thiessen attempted an angle raise for a single. But his stone was light, and the stolen trey made it 7-0 for Alberta.

Manitoba would cut the lead in half with three in the sixth, but Manitoba conceded defeat after surrendering two more in the seventh.

Smart said the stolen two in the fourth was pivotal for his team.

“Those guys (Manitoba) play it pretty tight, and we knew we couldn’t keep up with them in a hitting game, just because they throw them better than we do,” he said. “So we tried to keep the pressure on as much as we could and incrementally make it a little harder for them to make their shots. Getting that two I think changed the momentum, and they had to change their game a little bit, and it gave us more confidence.”

While it took longer than hoped for, Smart said Wednesday’s victory was worth the wait — especially doing it with his longstanding teammates.

“Well, sure — you win five silver medals, and you can only say so often that there are a lot of other teams who’d love to to be where,” he said. “So this is the icing on the cake. It’s a great way for us to celebrate our long history of friendship. It’s a camaraderie — playing a game we love with people we love.”

In the bronze-medal game, Armstrong — with vice-skip Collinda Joseph, second Jon Thurston, lead Reid Mulligan and coach Bruce Gorsline — broke open a tight 3-3 game with a steal of one in the seventh and two more in the eighth for a 6-3 win over Northern Ontario. Dean’s Northern Ontario team was rounded out by vice-skip Gino Sonego, second Rick Bell, lead Lola Graham and coach Doug Gelmich.