Canada’s men’s, women’s and mixed doubles teams produced five out a possible nine wins on Thursday at the Curling World Cup Grand Final in Beijing, including a two-win day for Kevin Koe. 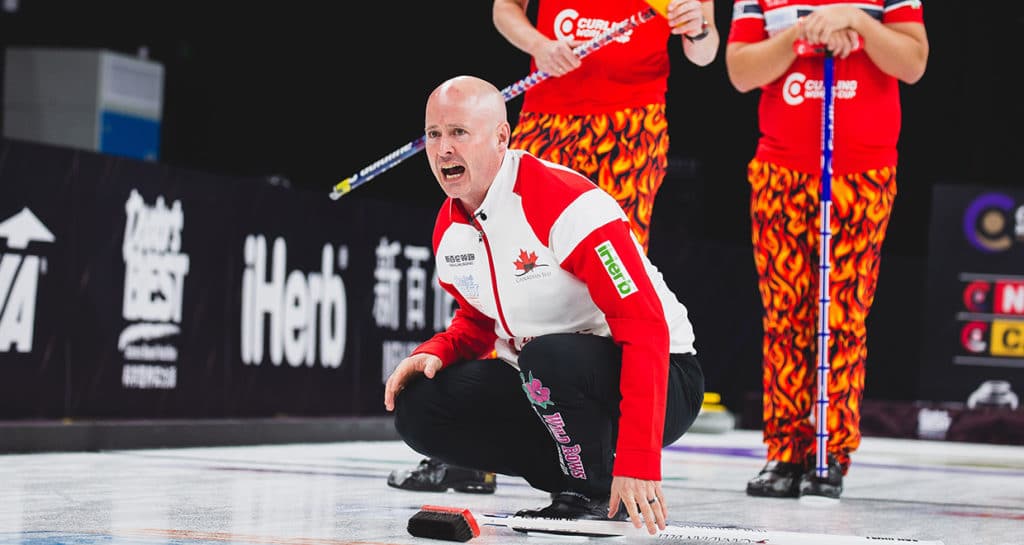 Kevin Koe and his team from Calgary bounced back from an opening-day loss with two wins on Thursday at the Curling World Cup Grand Final. (Photo, World Curling Federation/Céline Stucki)

The performance by Calgary’s Koe was the focal point of the day as it elevated his team up the standings after starting the event with a loss. Koe, vice-skip B.J. Neufeld, second Colton Flasch and lead Denni Neufeld started with a 5-4 win against Norway’s Thomas Ulsrud. Koe secured the game in the final end with a draw to the top four-foot on his first shot. Ulsrud missed a raise takeout, which provided Canada with a score of one to win the game.

Koe and company built on that momentum in their second game of the day with a 9-2 shellacking of Scotland’s Ross Paterson. Koe played the first end aggressively and it paid off with a draw for three. Canada was once again rewarded in the second end, tacking on a steal of three after Scotland missed its raise attempt. With a 6-0 lead after two ends, Koe cruised towards the win. Scotland scored two in the third end, but Canada replied with two in the fourth and a steal of one in the fifth end.

“We played really bad yesterday so it’s good we played pretty good today. The ice is still a little tricky but two wins we will take it. We’re back and we have chances to win if we can keep going,” Koe said.

Canada’s Koe, now 2-1 in the standings, returns to the ice on Friday with one game. He’ll play Switzerland’s Yannick Schwaller (2-1) – the only team to defeat Koe in the first half of the round robin – at 4 a.m. (all times ET).

“We’ve had a really good year so it would be great to finish it on a good note. There are a lot of good teams here and we had a good day today to get ourselves back, so that’s the goal we’re playing for Sunday,” he said.

In other men’s action, Dunstone, vice-skip Braeden Moskowy, second Catlin Schneider and lead Dustin Kidby began the day with a 5-4 loss to defending world men’s champion Niklas Edin of Sweden. Dunstone took a 3-2 lead with a hit for two in the fifth end and the teams exchanged single points in the following two ends. However, Canada left Edin with a shot for two in the final end to take the win.

The Canadian team attempted to regroup later in the day during its game against China’s Qiang Zou. However, an early lead by the Chinese was too much for Dunstone to overcome in a 7-5 loss. China took a 5-2 lead after the fourth-end break, which left Canada chasing during the second half of the game. After scoring one point in the fifth end, Canada kept China to one in the sixth and scored two in the seventh. It put Canada in a must-steal situation in the final end to force a shoot-out and the team came close. Dunstone’s final top-house guard attempt sailed a little too far into the eight-foot, which lined up a Chinese double to score one for the win. Dunstone, now 0-3 at the Grand Final, will get the chance to rebound with one game on Friday against John Shuster’s team (2-1) from the United States at midnight. 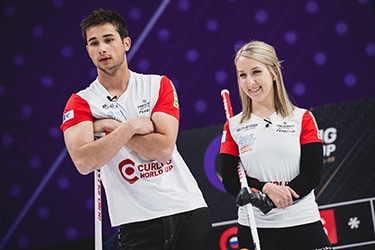 Both of Canada’s mixed doubles teams split a pair of games on Thursday.

Kadriana Sahaidak and Colton Lott of Winnipeg Beach, Man., opened the day with a 10-4 loss to Switzerland’s Olympic silver-medallists Jenny Perret and Martin Rios. Switzerland gained its ground in the game during the third end with a score of four, followed by a steal of one in the fourth. Canada had scores of two and one in the next two ends, but Switzerland scored its second four-ender of the game in the seventh end, which put the game out of reach.

However, Sahaidak and Lott bounced back with a 6-5 win later in the day against Russia’s Maria Komarova and Daniil Goriachev. However, the win didn’t come easy for the Canadian team. Russia had a 5-4 lead with the hammer heading into the seventh end, but Sahaidak and Lott stole single points in the final two ends to secure their first win of the championship.

“We were praying for a miss in the last end and we are improving each game as we keep gaining information on the ice,” said Lott. “It’s nice to finally get a W in the column.”

The mixed doubles team is 1-2 in the standings and begins the second half of the double round robin on Friday. Sahaidak/Lott get the chance to regain some ground as they play the two teams they had previously lost to: Norway’s Kristin Skaslien and Magnus Nedregotten (3-0) at midnight, and Perret/Rios once again (1-2) at 7:30 a.m.

Canada’s other team mixed doubles team, Laura Walker and Kirk Muyres (Edmonton/Saskatoon), also started the day with a loss. Sarah Anderson and Korey Dropkin of the United States defeated Walker/Muyres 8-7 on Thursday morning in Beijing. Canada took a 5-4 lead into the fourth-end break after a draw for three. But the United States regained the lead over the following two ends, scoring one in the fifth and stealing two in the sixth. Canada tied the game with a deuce in the seventh, but the United States used its power play in the final end to score one for the win.

But Walker and Muyres responded with a win later in the day. They bested Switzerland’s Michele Jaeggi and Sven Michel 6-5 in a shoot-out. The teams exchanged blows throughout the game, trading scores of two in the first two ends, followed by single points throughout the game. With the game tied 5-5, Muyres threw Canada’s final draw-to-the-button tiebreaker and landed it 5.9 cm from the pin and Michel put his shot 171.8 cm away from the centre of the house.

The Canadian team is 2-1 in its pool. Walker/Muyres take on China’s Cao Chang and Yuan Mingjie (1-2) at 8:30 p.m. on Thursday night. They’ll also get another shot at the undefeated pair from the United States – Anderson and Dropkin – who are 3-0 at the event. The game gets underway at 4 a.m. on Friday morning. 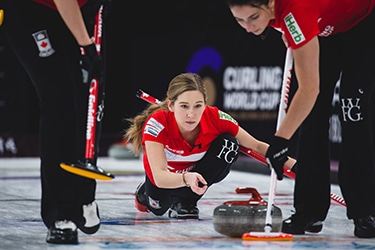 In the women’s competition Canada’s Jennifer Jones stayed perfect with a 2-0 record by winning her only game of the day. Jones, vice-skip Kaitlyn Lawes, second Shannon Birchard and lead Jill Officer defeated China’s Yilun Jiang 4-1. The Winnipeg-based team blanked the first two ends, scored one in the third and stole one in the fourth. China responded with a score of one in the fifth end, but Canada put the game away with single points in the sixth and seventh ends.

Jones and her team have upcoming games against Nina Roth of the United States (0-2) at 8:30 p.m. on Thursday night and Japan’s Satsuki Fujisawa (1-1) at 4 a.m. on Friday morning.

View the full schedule and all teams competing at the second leg in Beijing by CLICKING HERE.