Gaétan Lavallée’s motto is there are no barriers in life and everything is possible, which suits the 51-year-old to a tee.

Gaétan Lavallée delivers a shot during the Caledonia Cup

Having lived with muscular dystrophy for the last 17 years, the Quebec resident hasn’t allowed the debilitating disease to hold him back when it comes to the sport of curling or any other challenges that come his way.

Lavallée proved that when he and teammates Simon Hébert (skip), Jean-Pierre Gendron and Shawn Thompson recently claimed the Caledonia Cup championship, a competitive club-level event that features a maximum of one elite player per team (Hébert has competed at the Quebec Tankard level).

Lavallée was the first-ever wheelchair-bound athlete to compete in the Caledonia Cup, which features four categories (men, women, seniors and mixed, with 16 teams in each field), held this season at the Town of Mount Royal Curling Club. 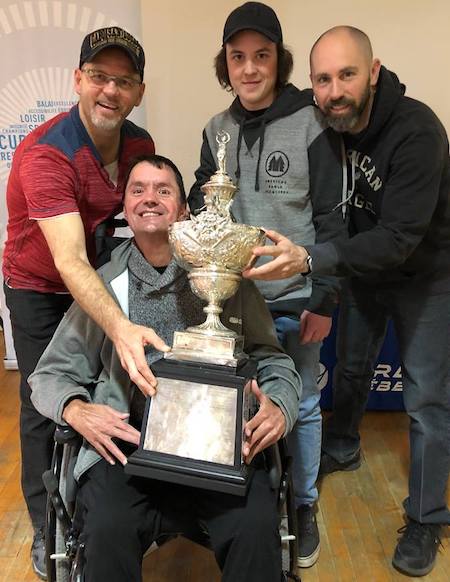 The Hébert rink finished preliminary play at 2-1, including a 7-0 win over 2018 champion Martin Patry. All four teams in the pool were tied at 2-1 so a draw to the button was held and Lavallée’s delivery – at 16.6 cm away from the pin – helped the team advance.

After quarterfinal and semifinal victories, the Hébert team then downed Mario Deschatelets’ team 8-2 to claim the title and cap the feel-good story of the event.

“It was an amazing story,” said Marc-André Robitaille, executive director of Curling Quebec.

Lavallée was first introduced to the sport in September 2014, participating in social curling event with his wife’s co-workers. He was planning to be a spectator only because he is in a wheelchair, but the organizer, Hébert, told him that nobody was there to watch.

Lavallée played the entire game and stood out among the other newcomers by making a few good shots and playing a consistent game. From there, Lavallée – who used to play hockey, softball, soccer, football, golf, darts and fishing – developed his love for curling.

“I love being part of a team and taking part in competitive events,” said Lavallée, who also has a passion for music and played drums for 15 years with a band that produced an album and toured Quebec.

Hébert also invited Lavallée to participate in a pre-season annual tournament at the Valleyfield Curling Club.

“I loved that experience and felt well integrated into the group from the get-go as people were chatting with me and interacting,” said Lavallée.

His team was eliminated, but he was asked to step in for another team and, again, Lavallée felt the experience was extremely positive.

Hébert then invited Lavallée to join his ladder team on a regular basis for a full season and the foursome went on to win the league.

“Curling is my main hobby and a weekly event I don’t want to miss,” he said. “I enjoy the game itself and the technical side of it and also appreciate the social aspect.”

People quite often ask about his condition, but Lavallée prefers to talk about curling or other sports and varying anecdotes.

He admits to facing many challenges during competition.

“Curling clubs are rarely accessible, as you need to use stairs in most of them to get to the ice, locker-rooms or the bar area. Washrooms are also very rarely accessible, which creates challenges,” Lavallée explained. “But I can count on the help of my teammates and, quite often, the precious collaboration of fellow players or members who offer their precious help.”

Success had followed Lavallée along as his league team, which includes Hébert, Simon-Olivier Hébert and Laurie Lavoie (with Shawn Thompson acting as a spare) experienced an undefeated season on Tuesday nights with one tie to go with all wins. On March 20, 2017, the team also recorded a rare eight-ender at the Cornwall Curling Club.

For the Caledonia Cup, Hébert wanted his friend Lavallée to live a different experience and, at the same time, they both wanted to educate people about living and playing with a physical condition.

“The response was awesome and it is an experience I will never forget,” stressed Lavallée, whose condition has deteriorated over the last four years, his muscles disintegrating gradually.

But that will not hold Lavallée back as he and Hébert are already thinking about their next adventure on the ice.

“We are far from satisfied and will continue to push barriers,” said Lavallée.