As if a chance to qualify for the Tim Hortons Roar of the Rings weren’t enough, the 14 teams who will contest the 2019 Home Hardware Canada Cup, presented by Pioneer, Nov. 27-Dec. 1 in Leduc, Alta., will be playing for a purse that will see the winning men’s and women’s teams pocket $40,000 apiece — a staggering 185 per cent boost over last year. 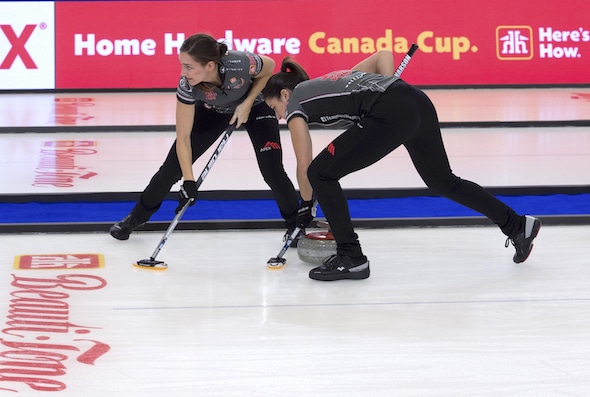 That, combined with the berth in the 2021 Tim Hortons Roar of the Rings (the event that decides Canada’s four-player team reps for the 2022 Winter Olympics in Beijing) that goes to the winning teams, will raise the pressure level at Sobeys Arena in Leduc significantly, and fans who want to watch the country’s top seven men’s and top seven women’s teams all under one roof will need to act quickly as only 150 full event packages remain.

The field will feature a who’s-who of Canadian curling, led by reigning Canadian champions Kevin Koe of Calgary, who won the Tim Hortons Brier last March in Brandon, Man., and Chelsea Carey, whose Calgary team prevailed at the 2019 Scotties Tournament of Hearts in Sydney, N.S.

As well, the defending champs from the 2018 Home Hardware Canada Cup in Estevan, Sask., will be in Leduc — Winnipeg’s Jennifer Jones and Brad Jacobs of Sault Ste. Marie, Ont.

The local hopeful in Leduc will be the Edmonton-based Brendan Bottcher team — silver-medallist at the past two Tim Hortons Briers, and winner of the final three Grand Slam of Curling events of the 2018-19 season.

The men’s field is rounded out by John Epping (Toronto), Brad Gushue (St. John’s) and Glenn Howard (Toronto), while the other women’s teams that have qualified are skipped by Rachel Homan (Ottawa), Casey Scheidegger (Lethbridge, Alta.,), Robyn Silvernagle (North Battleford, Sask.) and Kerri Einarson (Gimli, Man.). Scheidegger’s team will be skipped in Leduc by Cheryl Bernard, as Scheidegger is  due  to give birth to her second child in November.

The final entries into the 2019 Home Hardware Canada Cup will be the top-ranked teams on the Canadian Team Ranking System as of Nov. 11 that haven’t previously qualified.

In addition to the cash and Tim Hortons Roar of the Rings berth, the winning men’s and women’s teams will also gain entry into the 2020 Continental Cup of Curling, presented by Service Experts Heating, Air Conditioning and Plumbing, Jan. 9-12 in London, Ont.

The teams will play a single round-robin, with the top three making the playoffs — the first-place team gets a bye to the final, while the second- and third-place teams will clash in the semifinals.

Single-draw ticket prices will be:

The full schedule, featuring all of the matchups, is available on the event website, www.curling.ca/2019canadacup.

Some of the highlights include opening-draw tilts between Team Koe and Team Epping, while Team Bottcher is up against Team Gushue.

In the opening day evening draw, it’s a 2018 men’s final rematch between Team Koe and Team Jacobs, while the final round-robin draw, on Nov. 29 has Team Koe playing Team Gushue while Team Jones is up against Team Homan.

All tickets and packages are subject to standard ticket service fees, and are available online at curling.ca/tickets or (833) 219-9444.

Subject to availability, $15 youth tickets will be available for purchase during the event; this offer is not available for advance purchase.