It wasn’t the prettiest of wins, but it did prove that when it mattered most the Canadian team could battle back from adversity at the 2019 World Mixed Curling Championship. 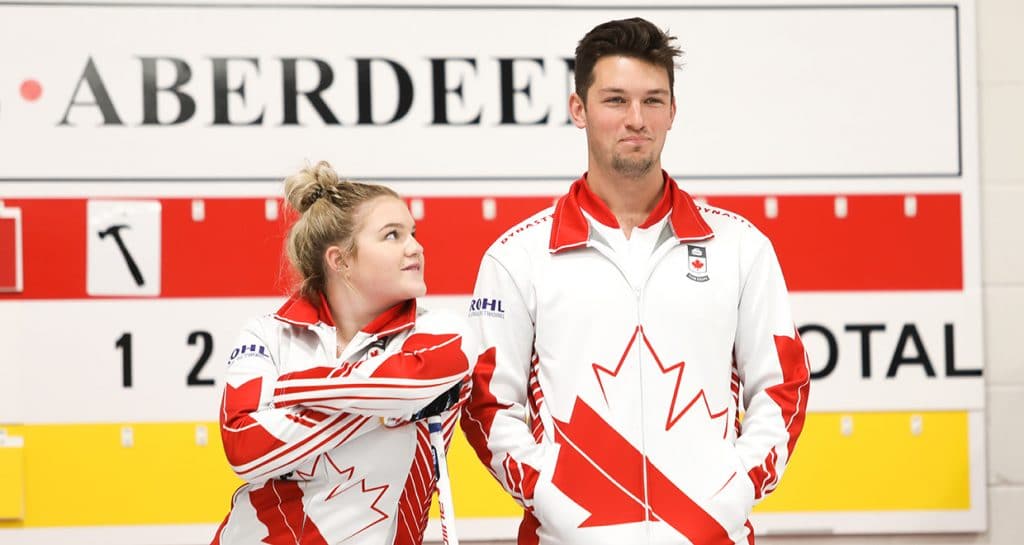 The win keeps Kurz, vice-skip Meghan Walter, second Brendan Bilawka and lead Sara Oliver – of the Assiniboine Memorial Curling Club in Winnipeg – along with national coach Jim Waite undefeated and at the top of the standings in Pool A with a 4-0 record.

But the victory was in question right from the get-go after Hong Kong scored three in the opening end. While Canada responded with two in the second, Hong Kong scored a single in the third and a steal of one in the fourth for a 5-2 lead halfway through the game.

“With the team being so positive out on the ice is was easy to come back from it [giving up three in the first end] even if we were down. Then giving up the other steal and being down three again, we just knew we had to fight back again,” said Walter, the 17-year-old vice-skip.

Sara Oliver and Brendan Bilawka have plenty to smile about after securing their fourth victory at the 2019 World Mixed Curling Championship. (Photo, World Curling Federation/Richard Gray)

And that’s exactly what Canada did in the second half. First, it tied the game in the fifth end with a score of three and forced Hong Kong to one point in the sixth to trail by one point. Kurz and his team regained the lead in the seventh end with a deuce and stole another point in the final frame to secure the comeback win.

“Getting these kind of wins under our belts is always a good thing, you can’t expect to have every perfect game so we always need to have those tough ones to fight back in because without those we’re not going to learn from them,” Walter said.

The Canadians are back on the ice Wednesday against the winless Nigerian team (0-4) led by skip Tijani Cole at 7 a.m. (ET).

The top three teams from each of the five eight-team pools will advance to the single-elimination playoffs on Friday. The fourth-place team with the best Draw Shot Challenge accumulated throughout the event will earn the final spot in the 16-team playoff.

The semifinals and gold- and bronze-medal games will both be played on Saturday.