Canada will play for a medal at the 2019 World Mixed Curling Championship. The only question that remains is for which colour. 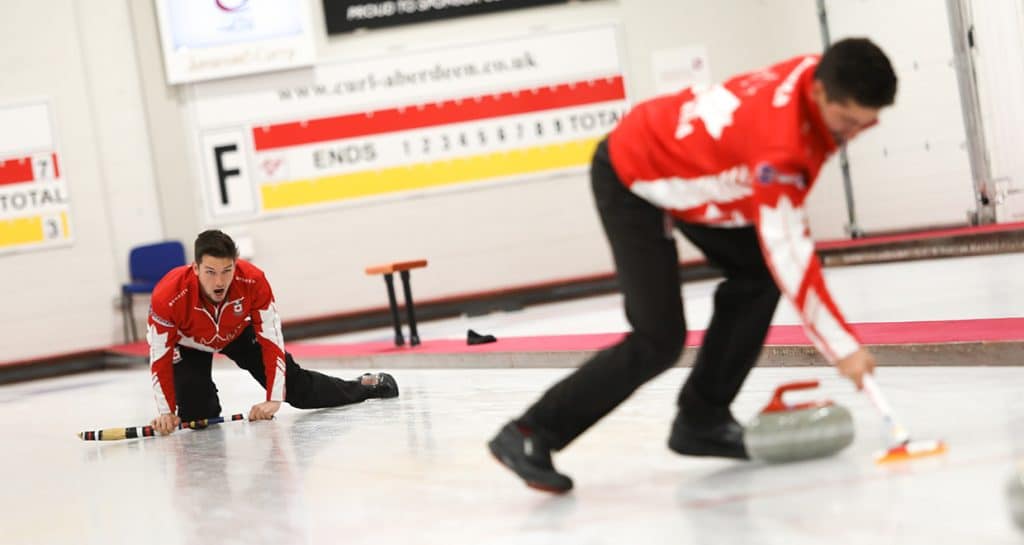 Canadian skip Colin Kurz calls line during his Round of 16 game against Sweden on Friday at the 2019 World Mixed Curling Championship. (Photo, World Curling Federation/Stephen Fisher)

Canada’s Colin Kurz of the Assiniboine Memorial Curling Club in Winnipeg defeated Tobias Thune of Denmark 6-4 in the quarterfinals on Friday in Aberdeen, Scotland. Kurz, vice-skip Meghan Walter, second Brendan Bilawka, lead Sara Oliver and coach Jim Waite now advance to the semifinals against Ingvild Skaga of Norway at 4 a.m. (all times ET) on Saturday. A win puts Canada in the gold-medal game at 10 a.m., while a loss would place it in the bronze-medal game scheduled for the same time.

“There were more pressure shots in this game than I’ve had to make in the rest of the week,” Kurz said, “My team played so good in front of me, they kept it clean for the most part and I was never really in trouble. It was a good game right until the end.”

The Canadians contained Denmark throughout the game, scoring two in the first end with hammer and maintaining a slight lead throughout the remainder. Canada took its biggest lead – a three-point advantage – by scoring two in the sixth end and Denmark replied with a deuce in the seventh to trail 5-4. With hammer, Canada scored one point in the final end for the victory.

“There were a couple of times we thought we had Denmark in trouble, and they would just make some good shots. It’s what we’re expecting for the rest of the event,” Kurz said.

On the other side of the bracket, Norway defeated Hungary’s Gyorgy Nagy 9-6 to advance to the semifinal against Canada. Meanwhile, Germany’s Andy Kapp takes on South Korea’s Yujin Seong in the other semifinal game. Germany defeated the hometown Scottish team (Luke Carson) by score of 9-7, while South Korea bested Switzerland’s Manuela Siegrist 6-3 in the other quarterfinal games.

Earlier in the day Canada defeated Simon Olofsson of Sweden 9-4 in the Round of 16. Canada opened with steals of two and four in the first and second ends, which allowed the team to control the house for the remainder of the game.

“Any time you don’t have the hammer it’s always trying to force, as soon as you have a chance to put some pressure on the other skip you want to take that opportunity,” Kurz said about opening the game without hammer. “I know as a skip I don’t want to throw a draw against a bunch of rocks, so that’s kind of the idea to make them throw some tough shots.”