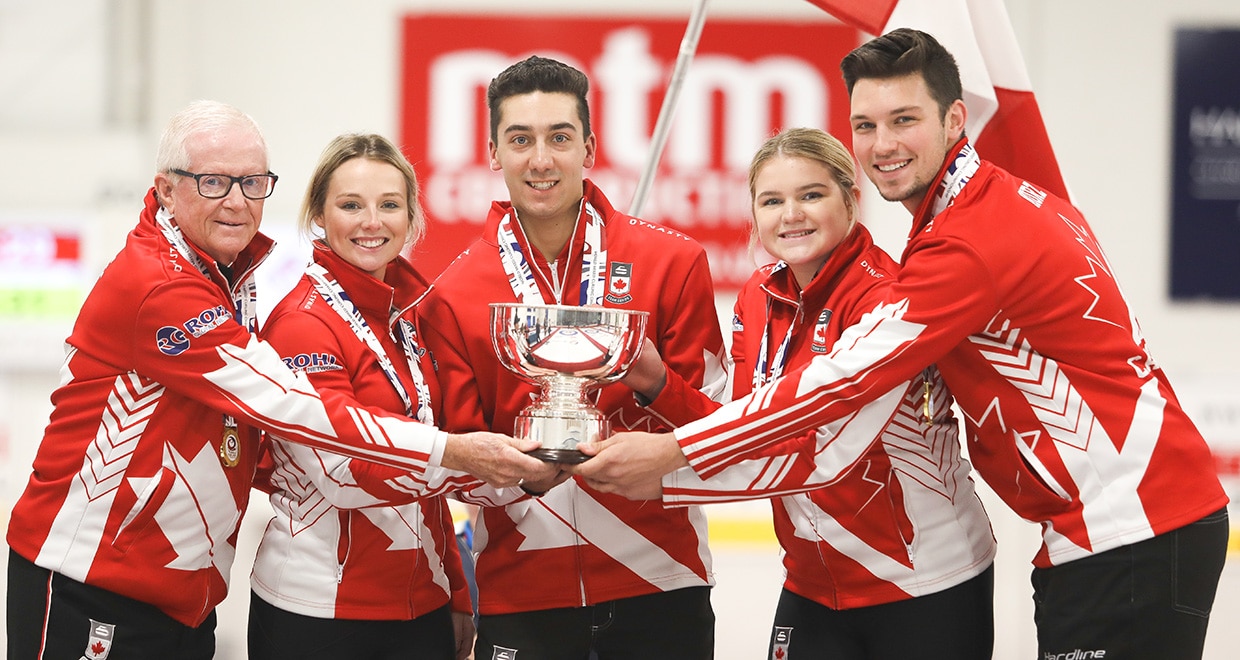 Canada’s Colin Kurz and his team wore the Maple Leaf for the first time in their careers and certainly did not disappoint. The young team ran the table at the 2019 World Mixed Curling Championship, securing a gold-medal win on Saturday.

What started as a group of friends from Winnipeg creating a mixed curling team has ended with a triumphant finish after Kurz, vice-skip Meghan Walter, second Brendan Bilawka and lead Sara Oliver (along with national coach Jim Waite) scored two with hammer in the eighth end to defeat Germany’s Andy Kapp 6-5 in Aberdeen, Scotland.

“World champion has a good ring to it,” Kurz said. “We’re very happy, it hasn’t really sunk in yet, but it’s kinda what we came here for. That we were able to achieve that I couldn’t be happier for the team.”

The victory was fitting as Canada started and finished the world championship with games against Germany. The teams opened round-robin play against each other with Canada taking a 6-3 victory. However, the gold-medal game was a much closer affair.

Tied 1-1 after the fourth-end break, Canada cracked a three-ender and hoped to gain control of the game. However Kapp, a two-time world men’s silver-medallist and three-time Olympian, wasn’t letting Canada off the hook. Germany replied with three in the sixth and stole a point in the seventh for a late-game lead. But Canada orchestrated the game-winning deuce in the final end.

“It was a good feeling seeing that rock come down and to know that we had it. I don’t think I’ll forget that feeling for a long time,” Kurz said.

The victory puts Canada in unprecedented territory as no nation prior has won back-to-back gold medals since the event began in 2015. It also became the second team to go undefeated at the event after Russia completed the feat in 2016.

“I think that how good friends we are helped,” Kurz said about going undefeated. “We never really got into any big problems. We were really happy all week spending time having fun in Aberdeen and enjoying the event. We were able to socialize a little bit with all the teams here and we didn’t overthink anything. We really can’t be happier how this whole week went.”

Walter, the vice-skip, also goes down in history for a record of her own. At age 17, she becomes the youngest player in history to ever win a world mixed gold medal.

With the victory, Canada maintains its first overall spot in the World Mixed Curling Rankings, based on four years’ worth of results.

Canada defeated Norway’s Ingvild Skaga 6-5 in the semifinal earlier in the day. Canada held onto the lead in a game that came down to the last rock, forcing Norway to a single point in the eighth end to win the game.

The nation’s best mixed teams will compete for the right to represent Canada at next season’s World Mixed Championship in two week’s time. The 2020 Canadian Mixed Curling Championship will be staged in Saguenay, Que., from Nov. 3-9.