Ottawa’s Rachel Homan is the number one team in the world… again… for now. 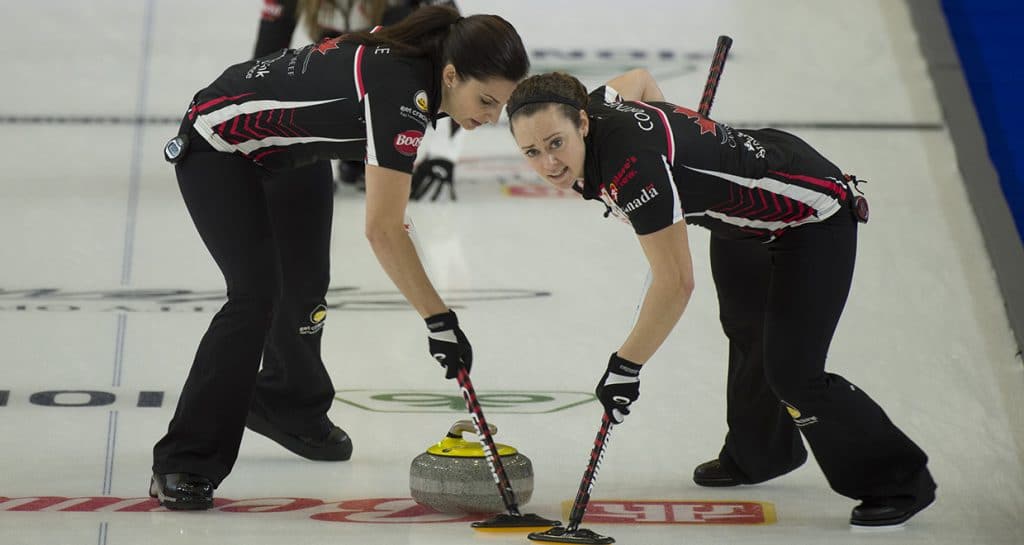 Lisa Weagle, at left, and Joanne Courtney of Team Homan enter this weekend’s Grand Slam of Curling Masters event as the top team in the world. (Photo, Curling Canada/Michael Burns)

Kerri Einarson (Gimli, Man.), who lost to Homan in the semifinal in Portage la Prairie, Man., only earned  48.430 points. The difference was enough for Homan to once again regain the top spot on the World Curling Tour (WCT) rankings, but only by a slim margin.

The battle for first place has gone back and forth a few times this year, and included Switzerland’s Silvana Tirinzoni (the other semifinalist this weekend in Portage) earlier in the season. The top three spots have been a revolving door since September, and that situation isn’t likely to change as the season moves on.

With the first Grand Slam of Curling event starting Tuesday in North Bay, Ont., all the top teams will be in the field and maximum points will be up for grabs. Homan, Einarson or Tirinzoni could claim the top spot or Sweden’s Anna Hasselborg (No. 4) and Winnipeg’s Jennifer Jones (No. 5) could re-enter the conversation with a good result at the 2019 Masters.

Homan and Jones have both won the Masters tournament in recent years, as has Hasselborg, the defending champion. The 15-team event will be split into three pools of five, with eight teams qualifying for playoffs. The purse for the event will be $125,000, with $30,000 going to the winner.

The men will be playing for the same amount, in the same format. Like the women, there’s a battle at the top of the WCT standings, however, the race isn’t quite so tight. Calgary’s Kevin Koe has held the top spot all season, however, Toronto’s John Epping has been chipping away with a few strong performances early in the season.

Round robin play begins Tuesday in North Bay and will be broadcast on Sportsnet channels starting Thursday. For all scores and schedules, visit curlingzone.com.