Meet Keely Brown, third on the junior team that represented Canada at the World Juniors in Flims, Switzerland. 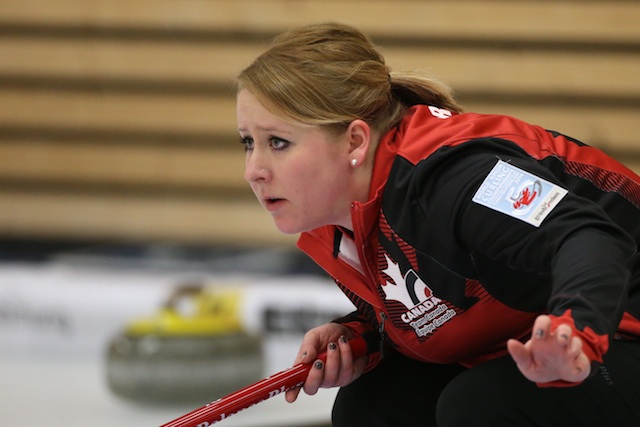 We last chatted with Brown back in 2011 (Featured Curling Athlete: Keely Brown) when she first moved to Edmonton and became a first-year student at the University of Alberta. Now she’s a third-year nursing student… and a world champ! Where’s Brown now and how has her life changed in three short years? We sat down with the 20-year-old Airdrie, Alta., native to find out. (Author’s note: I suggest you have a quick read of her earlier Q&A session before diving fully into this article!) What’s the biggest change you’ve seen in yourself between 2011 and 2014? Gosh, I don’t know. I think mostly in my independent life. I was living in residence and doing that whole typical university first year path and now I’ve got my own place. It’s pretty much the same me, a lot of school and a lot curling… a LOT more curling! 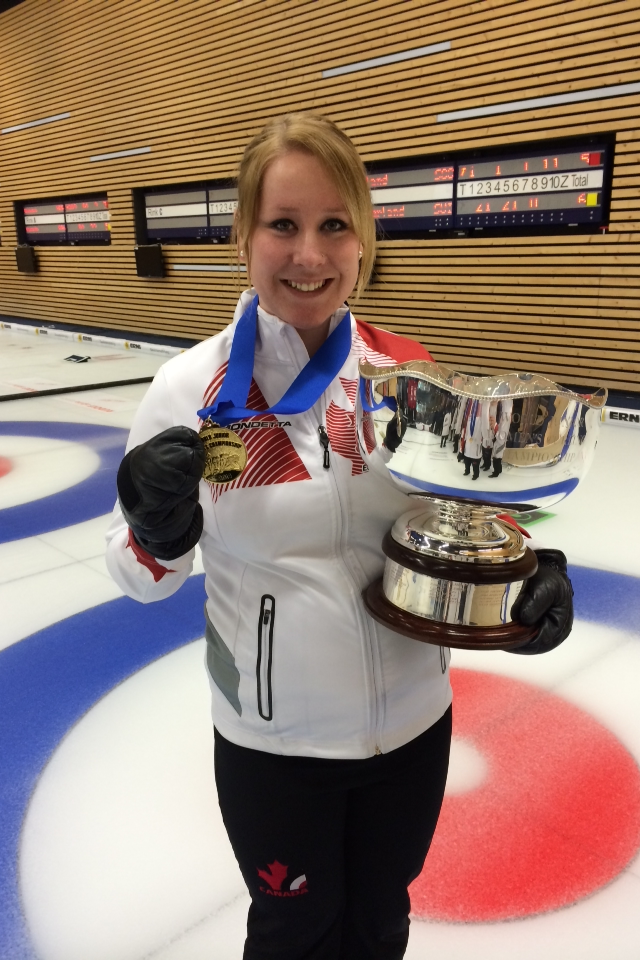 Keely Brown shows off her medal and trophy after the gold medal game at the 2014 World Junior Curling Championships (Photo courtesy K. Brown)

Last time we talked to you, you were skipping a team. How did the team evolve to having you vice and how do you like it? I first met Kelsey [Rocque] in the final in the Juveniles. She’s a strong player. Our second moved to Kamloops leaving an opening on our team and it just so happened that Kelsey was applying to the University of Alberta. We convinced her that she should join the team. At first it was tough because I had never swept before, but I really like it and enjoy the communication between front and back end. I also like that I still have a role in the strategy. What’s the impact of university curling on your curling career? It’s been everything. The program at the University of Alberta is unbelievably strong and we get to work with the National Training Centre (NTC), the very same coaches as Team Jennifer Jones gets to have when they come to train here. I can credit the University of Alberta program with most of our team’s success. What was the best piece of advice you were given before heads to Flims? We were given advice by Evan Asmussen (2012 world junior champion and Brown’s University of Alberta teammate) that if we lost a game or two not to get worried. Brad Jacobs & E.J. Harnden tweeted us on the day we lost two games encouraging us and telling us that it wasn’t the end and we could still do well. It was really cool to see that they were following our progress. What was something that most people don’t realize about playing in a world championship? It was totally different playing people from different countries. A lot of teams spoke perfect English. Language wasn’t as big of an issue as you might think. Only one time playing Korea where my rock handle didn’t light up and the Korean girls were trying to tell the official, but it was hard for them to relay the information to the official. We eventually worked it out. Oh, and we asked the Russian girls to change shirts, but they didn’t quite understand us so we had to motion it out. We were able to trade shirts in the end! What’s your favourite memory of playing in Flims? The 1vs2 game was my favourite because it was important to win it to get to the final and be assured a medal for Canada. It was awesome that we took the win. It was our funnest game of the tournament! 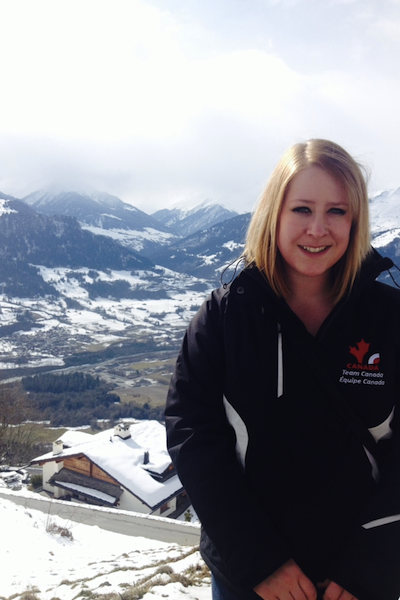 Brown ticked one item off her bucket list with a long-anticipated trip to Switzerland for the World Juniors (Photo courtesy K. Brown)

What were some of the biggest challenges you faced? We had to get used to playing teams that were equally strong or stronger than us. We were really surprised at how strong the field was and we had to up our game. We played the best games of our season. In the article back in 2011, we asked about your bucket list and you mentioned that wanted to travel to Switzerland. How does it feel to have checked that off? So good! It’s definitely been a long dream. One of my best friends was born there and I decided I wanted to go. It was a beautiful. I’m going to France (another bucket list item) in May so I’m checking them both off this year! Any new additions to the bucket list? It’s expanded to travel all of Europe. The one that I’ve been focusing on and it’s happening soon (author’s note: Brown is travelling to Europe in May). Graduating school is another one. I feel like it’s been a while and it’s taking time. Last time we chatted with you, you were working towards your coaching certification. Where does it stand now? I did a lot more coaching when I was in high school and being around my dad who’s heavily involved in coaching. Since moving to Edmonton, it’s been put on the back burner because of lack of time, but I hope to get back to it in the future. You’re heading to the CIS nationals this week. How is your team preparing for that after coming off of such a big event? It was tough coming home to get back into the swing of things. We’ve slept a lot to catch up on the time change and jet lag. We’re back to routine this week including practices. We have routines for almost everything. It’s helped. If you could go back in time to 2011 and give yourself some advice, what advice would you give? To not be so upset and hard on myself on the losses that we encountered. Prior to 2011, there we had two tough provincial losses in one season. I would tell myself to really use that as fire to try again next year. What are your future plans? To focus on school a bunch more. It would be nice to make the Alberta ladies provincials and get some experience at that level. Eventually I would like to move back to Calgary, but no solid plans for that yet. Kelsey still has one more year left in juniors and the three of us are moving up. We haven’t really talked at this point. We’re all going to have to catch up on school and focus on university nationals. What’s your new goal now? Olympics in 2022 or 2026 is reasonable and something to strive for.