Vengeance can be oh so sweet and Team Canada’s men were enjoying the taste after Friday night team matches at the 2015 World Financial Group Continental Cup, presented by SecurTek Monitoring Solutions. 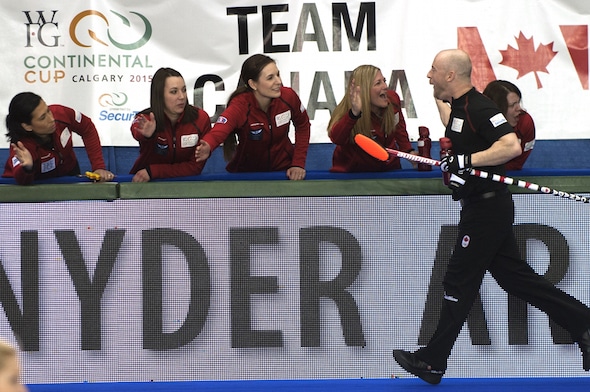 Somewhat humbled in the afternoon singles matches – losing 2.5 of three points – the two Canadian men’s teams in action in the evening, skipped by John Morris and Brad Jacobs, made up for it in the evening. Morris, 2010 Olympic gold-medallist with Kevin Martin and now skip of Team Canada with third Pat Simmons, second Carter Rycroft and lead Nolan Thiessen, got a single in the first and stole three in the second to cruise to a comfortable 8-3 win over Niklas Edin of Sweden. “We wanted to come back strong and get the momentum back and build up into the weekend,” Morris said of the team’s attitude heading into the match. Jacobs, the 2014 Olympic champion with third Ryan Fry, second E. J. Harnden and lead Ryan Harnden, counted two in the second and three in the sixth to roll to a 6-5 victory over former two-time world champion David Murdoch of Scotland. 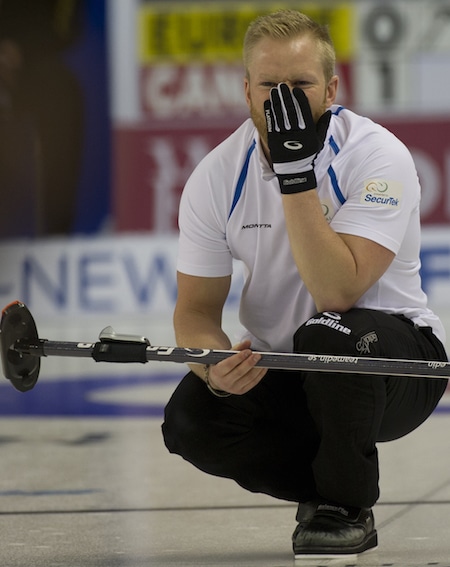 “In the fifth we got a really good break when Dave missed his last shot,” said Jacobs, who willingly gave up two in the eighth and final end. “He had a double for three there. We got aggressive; trying to lay two buried and put a lot of pressure on him. We just nosed it and left him shot for three. We got lucky and you need breaks and we got them.” In the other team game, Rachel Homan of Ottawa drew the button with last rock to nip Anna Sidorova of Russia 4-3. “Clean sweep, that was good,” Homan said moments before team coach Rick Lang jumped up to kiss her cheek and say “what a great draw shot.” The wins gave Canada three more points and increased their lead over Team Europe to 15-6 in the four-day competition. The first team to score 30.5 points in the tournament that features team, mixed doubles, singles and skins matches. Saturday’s play will see a second round of mixed doubles at 10 a.m. followed by team competitions are 2 p.m. and 6:30 p.m. (all times MT). For ticket and other event information, visit www.curling.ca/2015continentalcup-en/ For the complete schedule, go to www.curling.ca/2015continentalcup-en/draw-schedule/ TSN (RDS2 in French), the exclusive television network for the CCA’s Season of Champions, will provide complete coverage of the WFG Continental Cup. This story will be posted in French as soon as possible at www.curling.ca/2015continentalcup-fr/