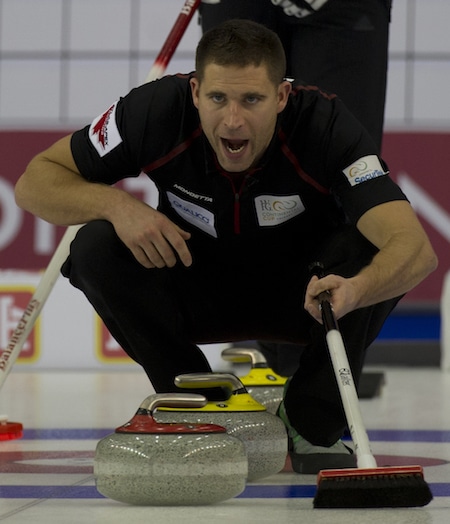 Teams earn one point for a win and half a point for a tie. There are a total of 60 points available from the team, singles, mixed doubles and skins matches. The first team to score 30.5 points wins the cup. Morris and his Team Canada teammates, third Pat Simmons, second Carter Rycroft and lead Nolan Thiessen, fell behind early, giving up three in the second end and steals of singles in the third and fourth. But they got two back in the fifth, stole one in the sixth and two more in the seventh. “We battled back hard, a good character builder,” Morris said of the game. “We were down 5-2 at the break and it wasn’t looking good. We just weren’t sharp enough, but we got some breaks and turned it around.” Asked if something was said at the break the often-joking Morris replied: “(Captain Randy) Ferbey gave us a massive pep talk in the change room, really rallied the troops,” he said with a sly grin. Homan, third Emma Miskew, second Joanne Courtney and lead Lisa Weagle jumped into an early 4-0 lead by stealing three in the third, but needed a last-rock draw by the skip to finally subdue Muirhead. 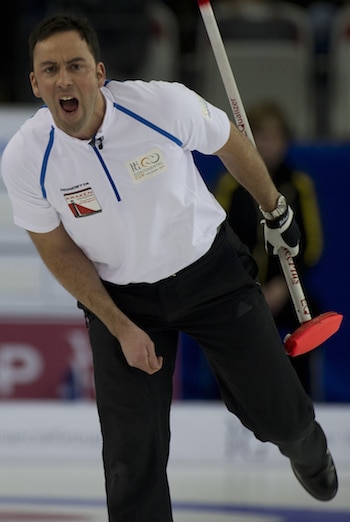 “The weight kind of came down in our game so we missed a couple of draws, light,” Homan said of the middle ends where Muirhead rallied to tie the game with two in the seventh. But her final stone was dead-on for the winning point. Jones, third Kaitlyn Lawes, second Jill Officer and lead Dawn McEwen had what should have been a comfortable 6-3 lead coming home but needed a big break to avoid a tie when Sidorova had a chance for three. “It was not our best end,” understated Jones. “She had a port to come through, it was a tight port and she wrecked on one of the guards to give us the win. We missed a couple of shots, it got a little dicey but we managed to pull it out.” There are three more team matches at 6:30 p.m. today. The four-day event wraps up with Sunday’s skins matches, at 11:30 a.m. and 6:30 p.m. MT, worth 30 points. Following the afternoon draw, Team Canada captain Randy Ferbey and coach Rick Lang, as well as Team Europe captain David Hay and coach Peja Lindholm, made their picks for Sunday’s skins games. Here’s the lineup: Skins 11:30 a.m. Sheet A (women) — Rachel Homan (Canada) vs. Margaretha Sigfridsson (Europe) Sheet B (mixed) — Pat Simmons, Lori Olson-Johns, Carter Rycroft, Rachelle Brown (Canada) vs. Torger Nergård, Anna Sidorova, Håvard Vad Petterson, Alexandra Saitova (Europe) Sheet C (men) — Niklas Edin (Europe) vs. Mike McEwen (Canada) 6:30 p.m. Sheet A (men) — David Murdoch (Europe) vs. Brad Jacobs (Canada) Sheet B (mixed) — Thomas Ulsrud, Margarita Fomina, Christoffer Svae, Ekaterina Galkina (Europe) vs. John Morris, Val Sweeting, Nolan Thiessen, Dana Ferguson (Canada) Sheet C (women) — Eve Muirhead (Europe) vs. Jennifer Jones (Canada) For ticket and other event information, visit www.curling.ca/2015continentalcup-en/ For the complete schedule, go to www.curling.ca/2015continentalcup-en/draw-schedule/ TSN (RDS2 in French), the exclusive television network for the CCA’s Season of Champions, will provide complete coverage of the WFG Continental Cup. This story will be posted in French as soon as possible at www.curling.ca/2015continentalcup-fr/