Team Canada widened its lead over Team Europe to 10 points by winning two of three mixed doubles matches Saturday morning at the 2015 World Financial Group Continental Cup, presented by SecurTek Monitoring Solutions. Matt Wozniak and Val Sweeting scored four in the third end and then stole singles in the next four ends to roll to an 8-3 win over Scott Andrews and Margaretha Sigfridsson. 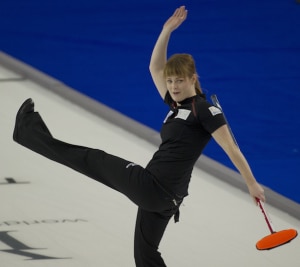 Dawn McEwen was getting her kicks on Saturday. (Photo, CCA/Michael Burns)

Kaitlyn Lawes and John Morris built a 5-0 lead after three ends but then needed last rock to score two in the eighth to beat Eve Muirhead and David Murdoch 8-5. Team Europe’s only point came when Anna Sloan made her last rock draw to score one and let her and partner Christoffer Svae nip the husband-and-wife team of Dawn and Mike McEwen 6-5. The results gave Canada a 17-7 lead in the overall standings. Teams earn one point for a win and half a point for a tie. There are a total of 60 points available from the team, singles, mixed doubles and skins matches. The first team to score 30.5 points wins the cup. In mixed doubles the teams begin each end with two rocks in play – one a centre guard and the other of a different colour on the back of the button. 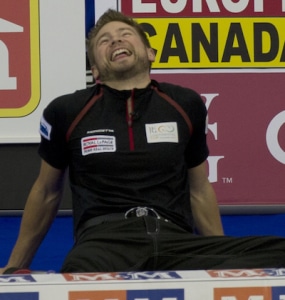 Mike McEwen, meanwhile, was sitting down on the job. (Photo, CCA/Michael Burns)

The attention of everyone in the arena, along with all the teammates not playing, was focused on Sloan and her final shot. Make it and Europe salvages a point, miss and Canada sweeps. “We had to go for it,” Sloan, third on Muirhead’s team, said of her winning draw to the button. “We had nothing else. When I got to the hack I wasn’t sure it was there, but there’s such a big swing if you’re dead (on with your) weight. I trusted him to call the line properly.” The McEwens were up 2-0 after two ends but Sloan-Svae turned the game with two in the third and a huge steal of four in the fourth. “Anna made some amazing shots in the game,” said an exhausted Mike McEwen. A skip, he normally doesn’t sweep much but in mixed doubles the shooter has to jump up, catch his rock and do the sweeping. 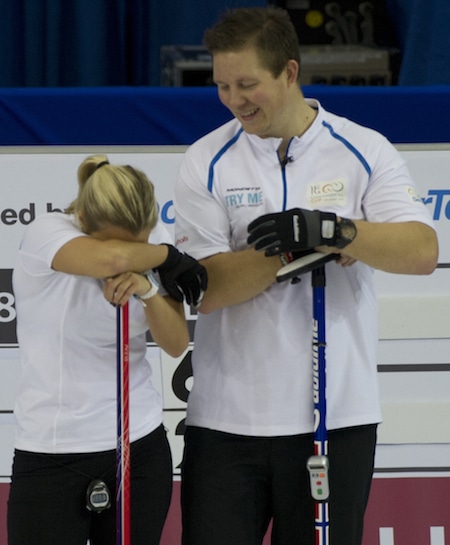 “It’s tiring. I’m beat,” he said. “I would never be able to play back-to-back games like that. I have a new respect for my front end.” Sweeting-Wozniak were down 2-0 after two ends before turning the game around. “We got off to a bit of a slow start with the two steals but Val made a great shot in the third end to get four and we kind of took control from there,” said Wozniak. The team got a bit of a break when Sigfridsson lost her last rock on a hog-line violation, leaving Canada the chance for the four. “It was lined up good, luckily,” explained Sweeting. “Matt made all his freezes that end and I could just slam them and it worked out.” There are two team sessions today, at 2 and 6:30 p.m. MT. For ticket and other event information, visit www.curling.ca/2015continentalcup-en/ For the complete schedule, go to www.curling.ca/2015continentalcup-en/draw-schedule/ TSN (RDS2 in French), the exclusive television network for the CCA’s Season of Champions, will provide complete coverage of the WFG Continental Cup. This story will be posted in French as soon as possible at www.curling.ca/2015continentalcup-fr/