Tracy Horgan of Northern Ontario made curling history on Saturday afternoon. With her 7-6 win over Kerry Galusha of the Northwest Territories, Horgan became Northern Ontario’s first-ever representative at the Scotties Tournament of Hearts. Horgan won a three-day pre-qualifying competition to advance to the main draw of the Canadian Women’s Curling Championship. The pre-qualifying competition was also a first for the Scotties. Meanwhile, in the first round-robin games of the 2015 Scotties, Team Canada’s Rachel Homan defeated Lauren Mann of Quebec 6-4, Mary-Anne Arsenault of Nova Scotia beat Heather Strong of Newfoundland/Labrador 12-7 and Stefanie Lawton of Saskatchewan downed Patti Knezevic of British Columbia 8-2.

“I think the biggest thing is relief,” Horgan said after her game. “These past few games have been emotionally draining. We are really happy. We didn’t want to go home. We wanted to play the rest of the week.” She said it is special to be the first Northern Ontario team to compete at the Scotties. “We’re proud to represent Northern Ontario,” the Sudbury skip said. Horgan was leading the game 3-2, without the hammer when she stole three in the sixth end. As Galusha’s final stone slid through the house, the momentum changed. Both skips said it was the turning point in the game. “The steal was definitely a momentum shift for us,” Horgan said. “It was a really well-played game, a lot better than the first game we played against them. Both teams played well. I think it could have gone either way.” 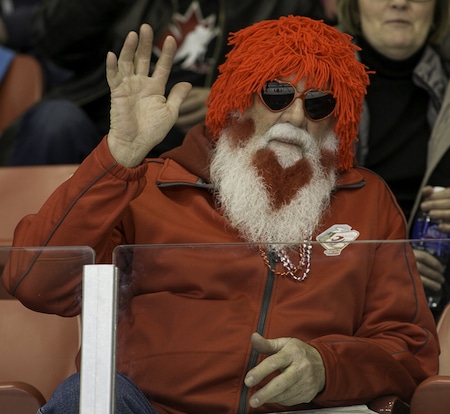 Horgan defeated Galusha 10-5 in their round-robin meeting. “We played an awesome game,” Galusha said. “I feel that game was lost on one shot. If I had a second chance to throw it, I would probably throw it the same way. It was one shot. We battled back.” The loss eliminated the Territories from the competition. That was reflected on Galusha’s face. “I don’t get emotional a whole lot, but to me it was just one shot that made the difference. That’s what makes it harder. Our week is over now. All the best to Horgan. They are a good team. They will probably make the playoffs. They’re really nice girls and I wish them the best.” Lawton’s Saskatchewan team looked sharp right from the get-go, stealing five points before Knezevic got her first point. “It was a great game, a good start for us, just getting used to the ice and to our new team out there,” Lawton said. Lawton’s regular second, Sherri Singler, is out of the competition with a sprained ankle. Alternate Stephanie Schmidt has moved into the lineup at second. Lawton said it is nice to open with a win. “It definitely is a long week, but I think a good start is always key. It gives you some confidence going into your next game. We play Team Canada next so that is definitely a good start for us. We wanted to come out and play well. And we certainly did that.” 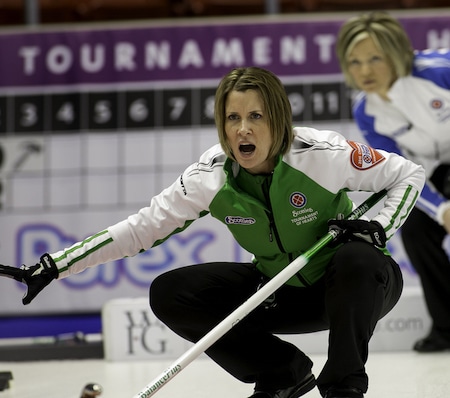 The crowd was firmly behind the Saskatchewan crew, which didn’t go unnoticed by the skipper. “It’s pretty cool to be playing with that. It’s awesome. It’s a long game out there, so you have to take some breaks and enjoy the crowd and have some fun with it, too. It’s great.” Homan controlled the scoreboard against Mann, but the Quebec didn’t go away. Facing three on the eighth end, Homan made a nice hit and roll off one of her own stones to count one and go up 6-2. Quebec scored two on nine to make the 10th end interesting. “Both teams played really well. It was close to the last end,” Homan, the two-time defending Scotties champion, said. “It’s nice to start off the week with a win to build your confidence a little bit and learn the ice at the same time.” She said she wasn’t looking ahead to the game against Saskatchewan on the late draw Saturday. “They are all the same. You need to win them all. None of them are easy.” Arsenault scored a three-, four- and a five-ender on her way to a 12-7 win over Heather Strong of Newfoundland. Tied at seven after eight, it looked like it was going to be one of those last-shot wins games. That was until Arsenault scored five in the ninth. The Nova Scotia said she can’t remember ever having three, four and five-enders in a game. “I think that was a first,” she said. The big ends aside, Arsenault said it was “a typical first game of a tournament, where you are trying to get to know the rocks and the ice.” The 2015 Scotties continues on Saturday with a draw at 7 p.m. CST. For ticket and other event information, visit https://www.curling.ca/2015scotties-en/ For the complete schedule, go to https://www.curling.ca/2015scotties-en/draw-schedule/ TSN (RDS2 in French), the exclusive television network for the CCA’s Season of Champions, will provide complete coverage of the 2015 Scotties Tournament of Hearts. This story will be posted in French as soon as possible at https://www.curling.ca/2015scotties-fr/