Mann was pleased with her performance against Knezevic. “It always feels nice to get a win and here especially,” said Mann, a first-time Scotties participant. She said the game against Canada benefitted her team. “A lot of people said it’s rough, you get Canada in the first game, but I was pretty happy about it because it was my first time skipping on arena ice and compared to most of the skips here, I am a relatively new skip. With Team Canada, you can’t feel bad if you lose, and yet you learn a lot playing against them.” Sweeting had to draw against four on the last end against Arsenault. Two up coming home, Nova Scotia was sitting pretty when Sweeting went to throw her last rock. Sweeting drew into the four-foot to cut Arsenault to one, and escape with the win. 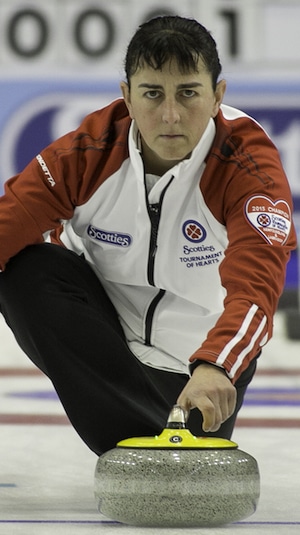 “I felt we had a strong game, but there were definitely some moments that we want back out there,” Sweeting said. “The last end was a little sketchy. We ideally don’t like drawing against four. “It’s good. We are getting comfortable out there.” Strong stole the two winning points when Robichaud didn’t make contact on relatively simple tap back. “You need a bit of luck and that’s what happened there,” Strong said. “If she throws that 10 more times, she probably makes nine of them. It wasn’t pretty, but it was a lowercase ‘W’, right?” Team Canada and Alberta top the standings at 2-0, with Manitoba and Prince Edward Island at 1-0. Saskatchewan, Newfoundland, Nova Scotia and Quebec are 1-1. Northern Ontario and Ontario are 0-1, with New Brunswick, British Columbia at 0-2. There are two more draws today – at 2 p.m. and 7 p.m. (all times Central). For ticket and other event information, visit https://www.curling.ca/2015scotties-en/ For the complete schedule, go to https://www.curling.ca/2015scotties-en/draw-schedule/ TSN (RDS2 in French), the exclusive television network for the CCA’s Season of Champions, will provide complete coverage of the 2015 Scotties Tournament of Hearts. This story will be posted in French as soon as possible at https://www.curling.ca/2015scotties-fr/