There will be a new Scotties Tournament of Hearts champion. Stefanie Lawton and a sea of green Saskatchewan fans knocked two-time defending champ Rachel Homan and her Team Canada foursome out of gold-medal contention with an 8-7 win in the Page playoff 3-4 game Saturday.

Lawton needed a draw to the eight-foot on an extra end to win and advance to the semifinal (3 p.m. Saturday; all times Central) against Alberta’s Val Sweeting. One of the shots of the tournament was thrown by Saskatchewan second Stephanie Schmidt on the extra end. Schmidt made a triple peel and rolled her shooter out as well. Schmidt’s outstanding shot came after she was called for a hogline infraction in the 10th end. The peel made the rest of the end relatively easy for Team Saskatchewan, which is rounded out by third Sherry Anderson, lead Marliese Kasner, alternate Lana Vey and coach Rick Folk. Even before Lawton’s final shot stopped, the Saskatchewan team was receiving a standing ovation from the more than 3,600 people in attendance at Mosaic Place. Schmidt was all smiles as she faced the media throng after the game. “Which shot do you want to talk about?” she said with a laugh. “Are you going to ask me why I held onto the rock too long (on the hogline violation)?” She said part of the success for her triple peel on the extra end was getting to throw in the same spot twice. “I just gave it a little more so it wouldn’t curl up. Stef called it beautifully. She saw it and called it for me. You have the crowd cheering and fist-pumping with you. I saw my family watching and that was pretty cool.” She said it was nice to redeem herself after the hogline infraction in the 10th end. “I was definitely gearing up to come back in 11 to make both mine really well for Stef,” said Schmidt. “It was nice to get that break between 10 and 11 with the coach and just slow everything down, and then back to your routine.” The Alberta-Saskatchewan winner will proceed to Sunday’s 7 p.m. gold-medal game for the right to represent Canada at the Zen-Noh World Women’s Curling Championship, presented by Ford of Canada, March 14 to 22 in Sapporo, Japan. 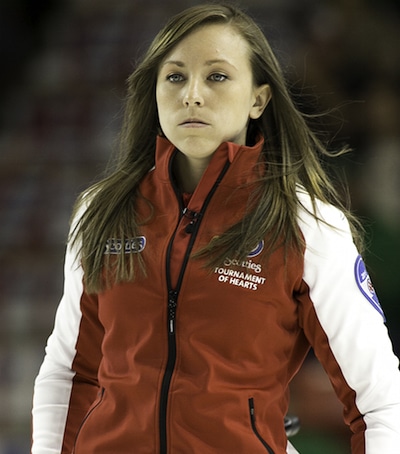 Team Canada skip Rachel Homan and her team from Ottawa have been knocked out of gold-medal contention at the Scotties. (Photo, CCA/Andrew Klaver)

Homan, whose Ottawa team — third Emma Miskew, second Joanne Courtney, lead Lisa Weagle, alternate Cheryl Kreviazuk and coach Richard Hart, was understandably disappointed with the loss. “I thought our team played really well,” she said. “There’s a couple of shots here and there that we missed by a couple of centimetres, but that’s the way it goes sometimes. Lawton’s team played really really well and good luck to them going on. They’re looking really strong.” Homan added the large pro-Saskatchewan crowd was good for the game and didn’t affect her team. “It’s another curling game. It’s a sport. It’s good. Curling is energetic and the crowd was into it. It’s great for the sport.” Team Canada will return to the ice on Sunday at 2 p.m. to play the semifinal loser for the bronze medal. For ticket and other event information, visit https://www.curling.ca/2015scotties-en/ For the complete schedule, go to https://www.curling.ca/2015scotties-en/draw-schedule/ TSN (RDS2 in French), the exclusive television network for the CCA’s Season of Champions, will provide complete coverage of the 2015 Scotties Tournament of Heart