Paris Curling Club President Mark Stouffer knows something about successful Learn-to-Curl (LTC) initiatives. His daughter, Samantha, created a highly effective program to attract local Brant County school children to the sport – a project that earned Samantha the 2013 Curling Canada Volunteer of the Year Award. But with membership numbers dropping, Stouffer wondered how to attract adult curlers to the fun-and-skills combination offered by a Learn-To-Curl program. His club’s solution? Billboards. 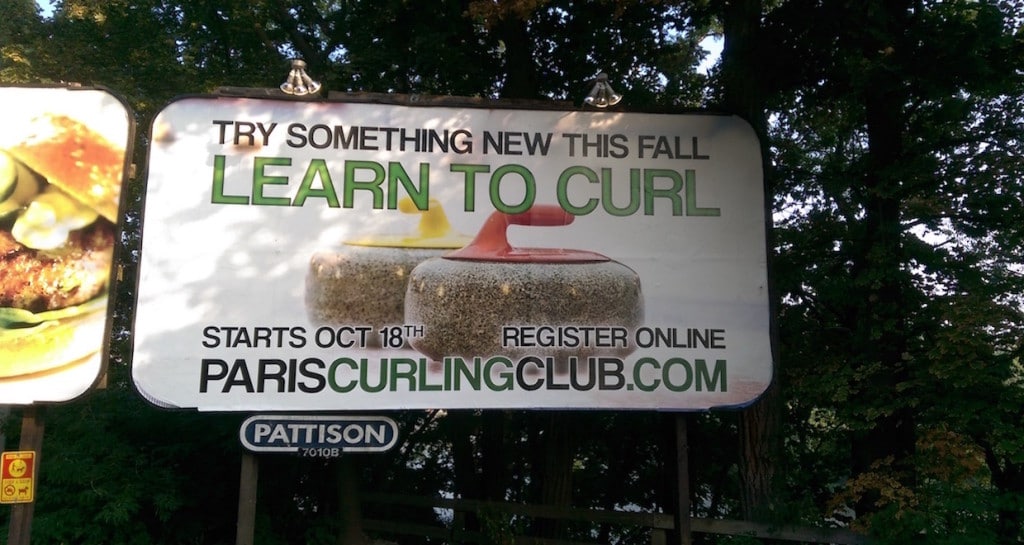 “One weekend while at an out-of-town bonspiel I heard of the adult Learn-to-Curl concept (Curling Canada’s Getting Started in Curling for Adults) and thought if I combined the technical aspects with the fun things we did with the youth, we might have something,” says Stouffer. So the planning and promoting began. “We tried magazines, newspaper, free radio spots, flyers, fair booth promotion,” says Stouffer about trying to get the word out. “But nothing came close to the success of our billboard.” Paris Curling Club’s 1st Vice President, Tim Risebrough, explains that the Board was already interested in the billboard idea and had spent the previous season researching the price, timelines and availability before contacting Pattison, a Canadian firm specializing in outdoor advertising. “They are basically the only name in Canada with billboards,” says Risebrough, who is a graphic designer by profession and who had a hand in designing the final product. Risebrough also notes that a billboard requires a very high-quality, high-resolution photograph. “Sourcing the photo we used wasn’t as simple as going over pictures we took at the club because of the quality requirements,” he warns. The whole process – from ordering, to designing, to receiving approvals, to the deadlines on printing – took about two months, all for a cost of $1820, including taxes. “But I would suggest anyone order it ASAP so they have more selection over location,” recommends Risebrough. Now that the word is out, Paris Curling Club’s Learn-To-Curl program, which has been evolving for four years, has really taken off. 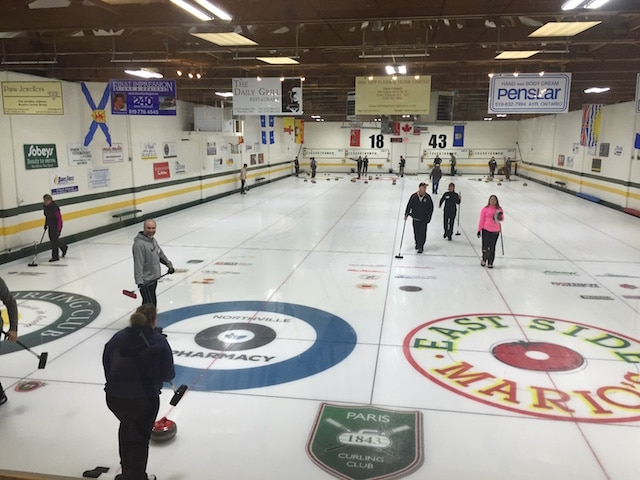 “This year, with the aid of the billboard advertising, we had 66 people come on the opening night and after the seven-week-long program, 36 signed up as full members. The response was so overwhelming we had to start another league to get them all in,” says Stouffer. “Even the previous years have had their impacts; two of our leagues and one of our bonspiels are now run by former LTC members,” he says. Programs like these depend on volunteers, and Stouffer knows all about that. He’s been on the club’s board, run bonspiels, organized the youth program, served as OCA Zone Rep and, to top it off, has been President of the Paris Curling Club for the past five years. All this from a curler with a “modest curling background.” “Where do you cut off the list of volunteers?” he says about club members who have contributed to the success of the adult Learn-To-Curl program at Paris CC. “I certainly couldn’t do this one my own; it requires about four key helpers and another six depending on class size. I definitely have to give a shout-out to my right hand man Tim Risebrough, not to mention my wife, Lesley, who helps me every day that I take on another volunteer role. If you have room you could add Earla Goodbrand, Tim Berkeley, Malcolm Smith, John Phelan, Linda Vivian, Dave and Liz Monkhouse.” (Editor’s Note: We always have room for shout-outs to volunteers!) Stouffer offers a few tips for clubs who want to promote and run a successful Adult Learn-To-Curl program, starting with the importance of charging participants up front. At Paris Curling Club, the seven-week program includes grippers, an engraved name tag and a final mini-spiel to encourage a sense of belonging. “Sounds crazy, I know, but offering something for free doesn’t work,” he says. “Sure it might get them out for one night (only if nothing better comes along in the meantime) but to gain confidence and fall in love with curling requires more than one night. People feel there is value in something they have paid for and also they feel committed to it.” 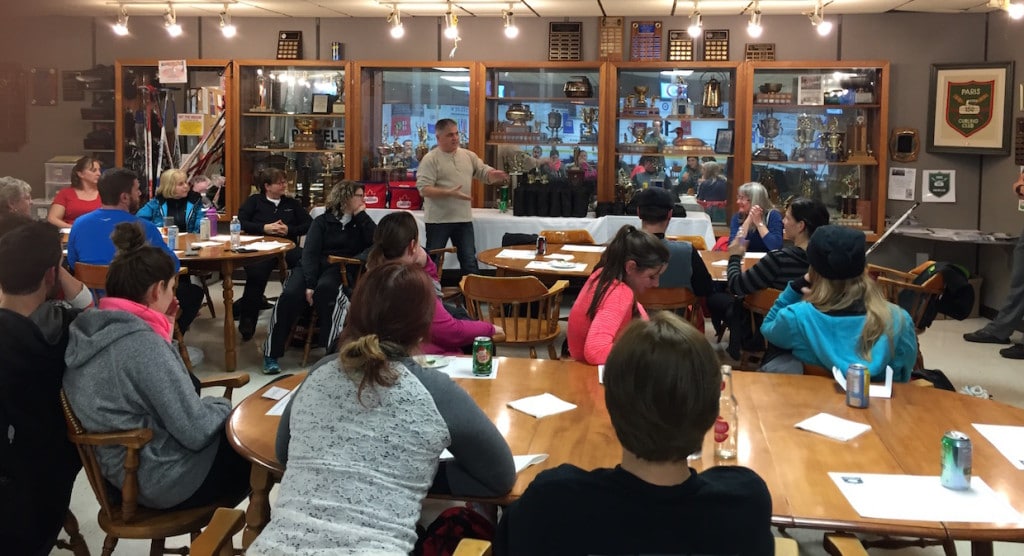 Stouffer also says it’s important to offer programs at the time the curlers will want to play. “Scheduling a Saturday morning LTC program to fill a Wednesday night league is counterproductive. The people who show up on a Saturday morning are the ones that have that time frame available. If you are trying to fill weeknight leagues, then run weeknight LTC. If you are trying to fill daytime spots then run daytime LTC programs.” And finally, Stouffer recommends finding the best way to promote your Learn-To-Curl program. “No question in my mind…billboard advertising is the way to go,” he says. “Start one-to-two months before your season starts. Keep it simple. Billboards are seldom enjoyed during a casual stroll but rather glanced at while driving by.” 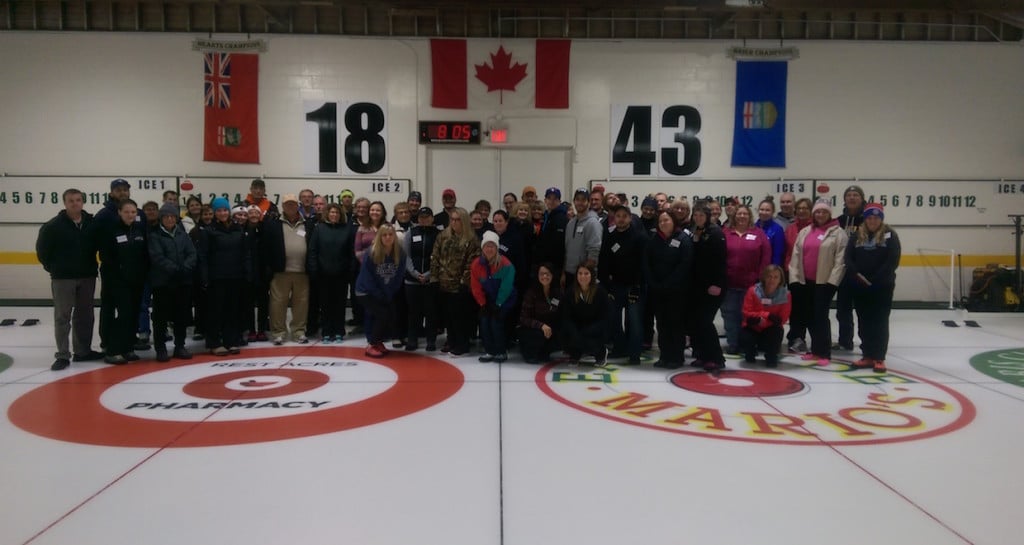 Participants in the Paris Curling Club’s 2015-2016 Adult Learn To Curl program gather on the ice in front of the 1843 sign, which commemorates the year the club was founded (Photo courtesy of Mark Stouffer)