Plenty has changed for Kristen Streifel since her most recent appearance at the Canadian Juniors. 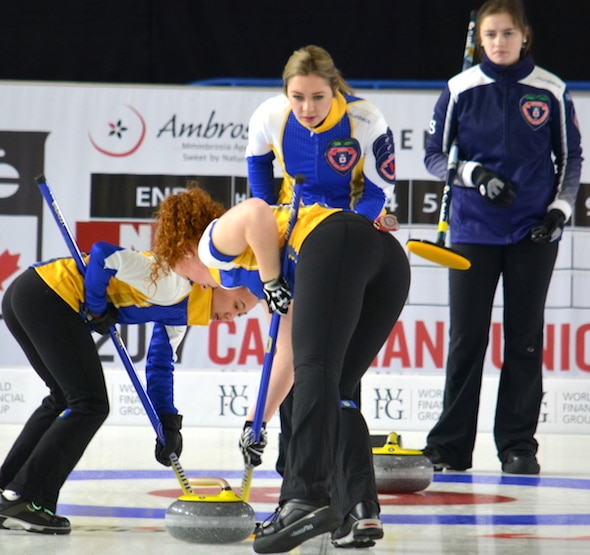 She’s two years older, of course, and instead of wearing Saskatchewan green — as she did at the 2012, 2014 and 2015 Canadian Juniors — she’s donning Alberta blue and yellow.

The biggest change from two years ago at Corner Brook, N.L., however, sits in the stands. During the 2015 Canadian Juniors, Streifel was getting regular phone calls and texts from her family in Saskatoon, where her older sister Chelsey, was recovering from brain surgery to remove a non-cancerous brain tumour (CLICK HERE to read that story from 2015).

Fast forward to Tuesday morning at the Archie Browning Sports Centre, where Streifel’s Alberta team was in a tight struggle with defending Canadian and world champ Kristin Clarke of Nova Scotia at the 2017 Canadian Junior Curling Championships, presented by Ambrosia Apples — there was Chelsey, also wearing her Alberta colours and cheering on her little sister. The brain surgery? A distant memory.

“It means the world to be here,” said Chelsey, moments after watching her sister’s Alberta team record a clutch 7-4 win to earn a berth in the women’s championship round. “I mean, she’s trained so hard for so many years, and I’m so proud that she gets to do what every curler wants to do — play under the big lights in an arena with all the fans. I watched the scores in 2015 on my computer, and she was calling and texting all the time. It probably helped my recovery a lot to focus on something so positive.”

Streifel, 21, moved to Edmonton to attend the University of Alberta, where she studies kinesiology. After a career spent mostly in green, she’s adjusting comfortably to her new Alberta colours, although things could change later Tuesday night as her team (vice-skip Chantele Broderson, second Kate Goodhelpsen, lead Brenna Bilassy, coach Amanda-Dawn St. Laurent) plays Saskatchewan’s Kaitlyn Jones (4-1; Regina) in a game that will decide first place in women’s Pool A; both teams have already qualified for the championship round.

“Some mixed emotions,” admitted Streifel with a smile. “I know all those girls and I’ve played against them quite a few times, but I think it’ll be a really fun game.”

And, should Streifel feel any stress during the game, she need only look for her sister in the stands for a little dose of feel-good.

“Oh, it’s incredible having her here, just knowing what she’s been through,” said Streifel. “She’s always been my inspiration, so having her in the stands, cheering me on, means the world to me. She’s always had such a positive mindset and that really rubs off on everybody around her.”

“Our mom was simply amazing through the whole process,” said Chelsey. “She coached both of us, and she really put us on the path that brought us here today.”

It was a light morning of action at the Canadian Juniors with only three games on the ice.

For the women, the 14 teams are split into two seven-team pools. The top four in each pool advance to the championship round, carrying forward their full won-lost records, while the other teams play in a seeding round to determine the pools for the 2018 Juniors in Shawinigan, Que.

For the men, since Yukon is not represented this year, they are split into one seven-team and one six-team pool. Following the round robin within their pool, the top four teams in each advance to the championship round but will carry forward only their won-lost records amongst the qualifiers.